On Thursday, China for the first time sold dollar-denominated bonds directly to US buyers and with the Chinese 10Y offering a record 2.5% pickup in yield compared to 10Y Treasuries, it’s hardly a surprise that demand was off the charts. 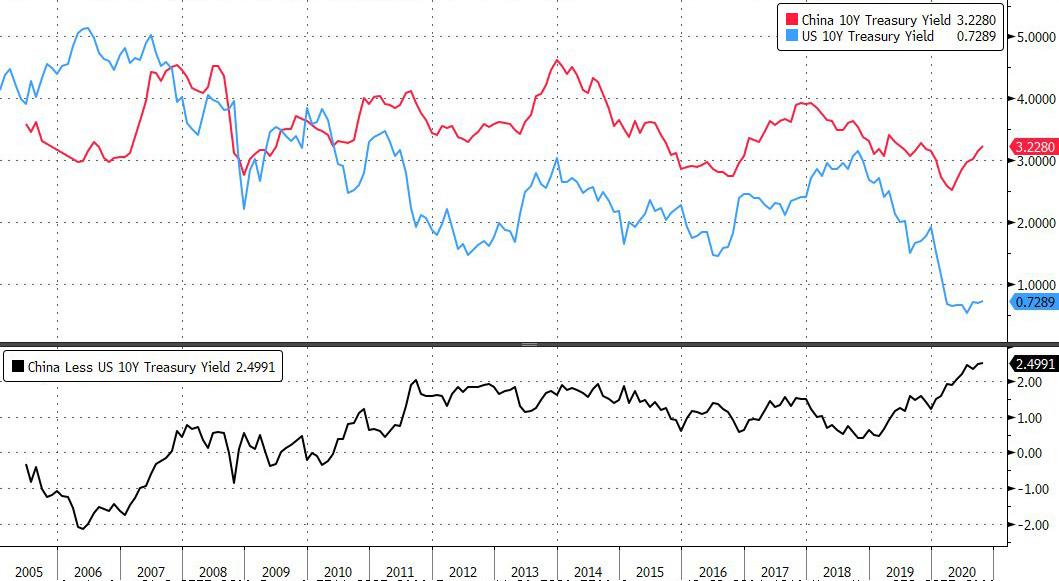 The $6 billion bond offering which took place in Hong Kong,  drew record demand, in part due to the attractive yield offered by Chinese paper and in part due to China’s impressive recovery from the coronavirus, with an orderbook more than $27 billion, or roughly $10 billion more than an offering of the same size last November, according to the FT, which added about 15% of the offering went to American investors.

The $6BN USD-denominated bond offering was as follows:

The yield on the 10-year bond was about 0.5% above the equivalent US Treasury, and helped the bond sales receive “a strong reception from US onshore real money investors”, said Samuel Fischer, head of China onshore debt capital markets at Deutsche Bank, which helped arrange the deal. Other arrangers of the bond sale included Standard Chartered, Bank of America, Citigroup, Goldman Sachs and JPMorgan.

What was unique about today’s offering is that unlike previous issuance, “the debt was sold under a mechanism that gave institutional investors in the US the chance to buy in.”

Rudy Giuliani Releases Text Message From Hunter Biden to Daughter Naomi: “Unlike Pop (Joe Biden), I Won’t Make You Give Me Half of Your Salary” (VIDEO)

Somewhat surprising is that frictions between Beijing and Washington had no impact “at all” on demand from US buyers, which included an American pension fund, one banker told the FT. In fact, the strategic timing of the bond sale which was arranged by the Chinese government just weeks before Americans head to the polls for the presidential election was meant to show “how tightly the financial systems of the two countries are linked, despite a trade war and tensions over technology and geopolitics.”

“This is the investor community showing confidence in [China’s] recovery,” said another banker on the sale, who added that “US investor participation in Chinese paper is not reduced by any means.”

Analyst responses were broadly enthusiastic about the offering:

Frances Cheung, head of macro strategy for Asia at lender Westpac, said the issuance suggested Beijing believed restrictions on access to dollar funding were “very unlikely to become a policy option” for Washington.

Hayden Briscoe, head of fixed income for Asia Pacific at UBS Asset Management, said the bonds would help “set the benchmark” for Chinese corporates such as petrochemical groups Sinopec and Sinochem, which also borrow in dollars.  “A lot of their expenses are in US dollars, and they borrow in the dollar market to match funds to that.”

He added that the bonds benefited from strong demand partly due to their scarcity value. “There’s so few of them and they suit sovereign wealth fund type buyers — they tend to just disappear.”

WW3 Minutes to Midnight. Biden’s Crack Pipe is the Least of it. Commie Mass Murder Plot!

Youtube Purges Independent Media and QTubers – Dozens Down Today – Including US