As community activists in Virginia, emboldened by Alexandria Ocasio-Cortez’s successful campaign to drive Amazon out of Queens, push back against Amazon’s plan to build its HQ2 in Crystal City, it looks like Amazon is preemptively scaling back its plans to expand in Seattle as it braces for more pushback from progressives. 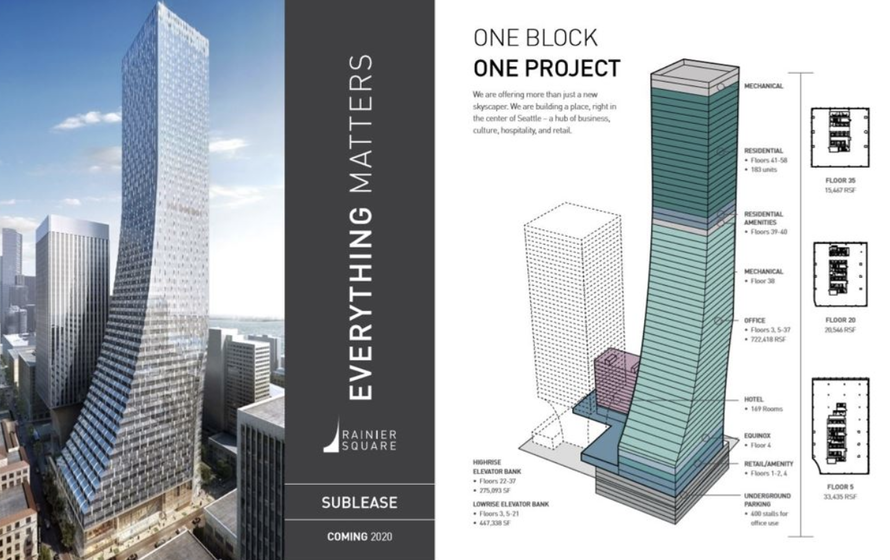 According to a report published by GeekWire, which managed to obtain a copy of a marketing flier circulated by the company, Amazon is seeking to sublet 30 floors of office space in a new building in Rainer Square – which is still under construction.

A marketing flier obtained by GeekWire confirms that the tech giant is seeking new tenants for its office space in Rainier Square, a building under construction that will one day be the city’s second-tallest skyscraper. Amazon had leased all 30 floors of office space in the building. After weeks of rumors, the listing was made official over the weekend, according to real estate brokers familiar with the marketing efforts. Amazon will make all of the office space it leased in Rainier Square available to other companies.

Amazon’s decision to pull out of the tower, which comes after the Seattle City Council backed down from plans to impose a new headcount tax – intended to provide more resources for homelessness – after the company threatened not to move into Rainer Square, is “emblematic” of the company’s “uncertain future” in its hometown.

Now, it appears Amazon is making good on that threat, despite having beat back the tax.

The skyscraper project, once an emblem of Amazon’s ambitions in Seattle’s urban core, now becomes a symbol of its uncertain future in its hometown. The move follows Amazon’s decision to back out of its HQ2 project in New York City after opposition there, amid signs that the company will focus its Seattle-area growth in nearby Bellevue, Wash.

Amazon did not immediately respond to GeekWire’s request to comment on the news. Real estate company JLL is listing the space on the company’s behalf, according to the flier.

A source told GeekWire that Apple, Oracle and Dropbox are all “circling”, and have expressed interest in renting space at the tower, which is located at 4th and Union Street.

While Amazon’s motives in subleasing the space are unclear, it’s worth noting that several Seattle City Council members recently traveled to New York City to warn activists about the downside of hosting Amazon in your backyard.

Rainier Square was at the center of a heated tax battle between Amazon and Seattle last year that became emblematic of the company’s troubled relationship with its hometown. As Seattle considered a tax on top-grossing businesses to fund affordable housing, Amazon threatened not to move into Rainier Square, claiming the City Council’s approach “forces us to question our growth here.” Although Amazon came out on top in that dispute, its future at Rainier Square remained uncertain.

And in an ominous statement that sounds suspiciously like a warning, Amazon said it would “continue to evaluate future growth” once other projects underway in the city are finished.

Amazon currently occupies 12 million square feet of office space in Seattle and has several additional projects under construction. The company will “continue to evaluate future growth” when those projects are finished, an Amazon spokesperson told GeekWire previously.

But in neighboring Bellevue, Amazon is leasing more than 1 million square feet of office space and is rumored to be looking for a lot more.

It’s likely that thousands of employees could have been situated in the office space that Amazon is now abandoning. Given that, it’s unlikely this decision was part of a routine reshuffling. Rather, it’s more likely that Amazon is trying to put its home town on notice: Don’t even think about trying to capitalize on the anti-Amazon sentiment that is currently in vogue among American progressives.