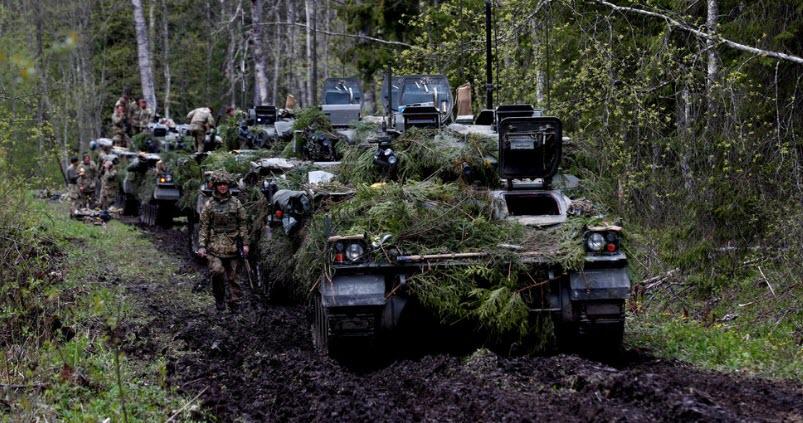 For this reason it can only be an excess of black humor or wilful amnesia on the part of Mr Stoltenberg that explains his perverse call for this particular conflict to end in this particular country, eight years after it received a prolonged visit from a Western military alliance over which he currently presides.

Along with recent NATO exercises in Estonia, involving 9,000 troops operating just 15km from Russia’s border, Jens Stoltenberg’s call for a peaceful resolution to the ongoing crisis in Libya  suggests that the pride of place above the entrance to NATO headquarters in Brussels should be inscribed in bold letters with the Orwellian mantra of ‘War is peace. Freedom is slavery’.

Because ever since the demise of the Soviet Union, NATO has been engaged in a perennial quest for meaning and relevance, which means to say for opportunities to unleash its democracy missiles and drop its democracy bombs. It is a quest that has and continues to involve ideologues in the media, neocon think tanks, and governments going out of their way to convince people across Europe and the US that without NATO manning the ramparts of Western civilization, the barbarians located to the North, South, East and West of them will come and destroy everything they hold dear.

Stripped of obfuscation, what we have here is a tawdry and base exercise in scaremongering; its aim to inculcate the belief that Russia, Iran, China, North Korea, Venezuela (you can take your pick) is their enemy and a threat to their security. Thus it is that the extent to which people living in the West refuse to internalise the propaganda of their own ruling class and its functionaries is determined by their ability to see the world as it truly is, rather than continue to exist in the darkened room of Western exceptionalism.

One man who understood this was Karl Marx, who put it thus:

“To call upon people to give their illusions about their condition, is to call on them to give a condition that requires illusions.”

And when people do give up a condition that requires illusions, and more importantly do so on a collective basis, a dynamic of social change is unleashed – a dynamic such as the Yellow Vest movement in France, for example. I suspect you would find it hard to convince any member of this mass protest movement, who’ve been determinedly protesting Macron and his neoliberal centrist works for the past six months across France, that what they need right now is NATO to protect them from Russia.

On the contrary, the violence that has and continues to be visited on thousands of protesters on the streets of Paris and elsewhere by Macron’s security services, makes a strong case for NATO intervention there. This, after all, was the premise upon which the Libyan intervention in 2011 rested, was it not: to protect civilians from the government against which they’d risen up in protest?

Well then NATO, what are you waiting for?

While we wait for those NATO fighter bombers to appear over Paris, let us return for a moment to Estonia to remind ourselves that the moral swamp of fascism has not yet been drained in Europe, not when today we have the glorification of Estonians who fought under the banner of Waffen SS during WWII.

That it is here, today, where NATO troops are engaged in military exercises on the border not just of any country, but the country whose people did more than any other to crush Hitler’s genocidal project in Europe seven decades ago, stands as a diabolical disgrace. There is no flag big enough to cover the shame involved in such a squalid turn of events, and no amount of historical revisionism can ever justify it.

And neither can ever be justified the murder of Libya eight years ago with the full participation of the same military alliance Jens Stoltenberg and his ilk want us to believe is the last best hope for peace and security in the world. Though the organization’s current secretary general may wish to elide NATO’s role in this crime, refusing to provide him with the satisfaction of doing so is a non-negotiable condition of the historical memory from which intellectual and ethical integrity flows.

A country that in 2010 could boast of a UN High Development Index coterminous with that of first world countries in child mortality, life expectancy, education, women’s rights, etc, is today a place where death and discord reign – and whereslave markets, yes slave markets, are alive and kicking.

In the last analysis, NATO’s legacy of provocation, intimidation and aggression contradicts its otherworldly and fatuous claim of being a military alliance that is dedicated to, according to the organization’s ownwebsite, democratic values and the peaceful resolution of conflicts.

There is nothing democratic about slave markets, and neither is there anything peaceful about conducting military exercises on Russia’s border; legitimising thereby the historical anti-Russian animus and fascist proclivities that exist within states that have been reduced to cat’s paws of Western hegemony.

The only possible conclusion to be drawn, after we draw up  the necessary historical balance sheet, is that NATO’s continuous existence is an impediment to peace, justice, global stability and, with it, human progress. It is a relic of the first Cold War which has done much to bring about the New Cold War, calling to mind the cogent analysis of Roman imperialism provided by political economist Joseph Schumpeter in the second decade of the 20th century:

“There was no corner of the known world where some interest was not alleged to be in danger or under actual attack. If the interests were not Roman, they were those of Rome’s allies; and if Rome had no allies, then allies would be invented. When it was utterly impossible to contrive such an interest—why, then it was the national honor that had been insulted. The fight was always invested with an aura of legality. Rome was always being attacked by evil-minded neighbors, always fighting for a breathing space. The whole world was pervaded by a host of enemies, and it was manifestly Rome’s duty to guard against their indubitably aggressive designs. They were enemies who only waited to fall on the Roman people.”