Authored by Mike Shedlock via MishTalk,

The 1922 Committee has certified 10 Tory candidates to battle to replace Theresa May. Boris Johnson solidified his lead. 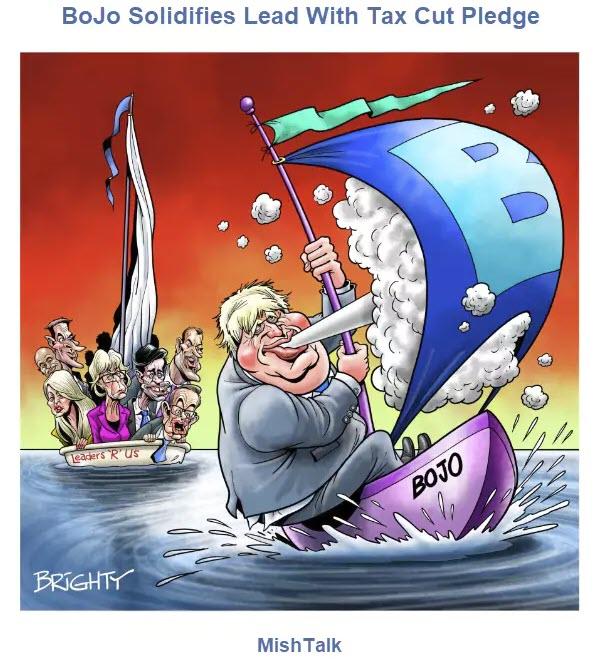 The Sun reports Tory leadership Race is Now Boris Johnson’s to Lose as MPs Back Him Over Brexit.

Yesterday I observed that there is a stark set of double standards operating about the cocaine use of Michael Gove vs Boris Johnsson in this leadership contest. Johnson has now denied he ever took the drug. I have scoured the archives for everything we know about it. Here it is. https://t.co/9QEUnZgMRY

In an afternoon speech, Gove tried to defend his cocaine position.

Q: You have a lot of supporters here. But you must know your campaign is in real trouble. When you were a prominent figure before you became an MP, you thought it was OK to snort cocaine. Then, as justice secretary, you were prepared to send poor people who did the same to jail. People do not like double standards.

A. Gove says he has reflected on this. He would ask people to judge him by what he did as justice secretary. He encouraged people to to accept that people should be given a second chance.

That defense was a flop. 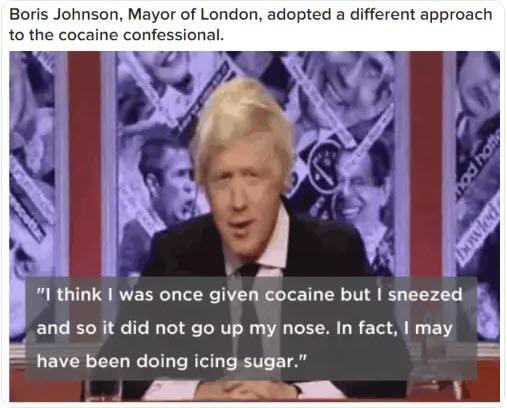 I Thought It Was Sugar

When ridiculous defenses work, it’s smacks of something far more fundamental: The party did not want Gove.

Gove did himself in, not cocaine. Gove was willing to ask for another Brexit extension.

That was political suicide.Cocaine hypocrisy obviously did not help.

Thanks to cocaine-gate, Jeremy Hunt is now the second favorite behind Johnson.

Like Gove, Hunt is willing to have another extension.

That will matter at some point. 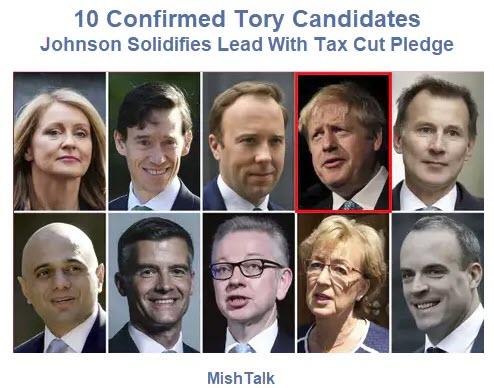 Art of Not Doing

“Boris Johnson is dominating the campaign, despite being largely absent from it. The former foreign secretary is refusing to give broadcast interviews, and his campaigning consists of private talks with MPs, plus the odd intervention in friendly newspapers (mostly the Telegraph, which pays him handsomely for his column). Yet what has been striking today is how all the other contenders are defining themselves in opposition to him, by stressing the need for serious leadership or a fresh start etc.”

Johnson’s Shut Up and Dance With Me Campaign

Johnson may not be giving interviews but he did do one critical thing: appeal to the base with tax cuts.

“One thing I will never do as prime minister is to use our tax and benefits system to give the already wealthy another tax cut,” said Gove

Kiss them all goodbye as hopeless. Gove did himself in. The rest, other than Hunt, never had any real chance in the first place.

Over the weekend we got a glimpse of the Brexit dynamics we are likely to see under a new Tory leader. Boris Johnson proposed two fiscal measures likely to create significant new facts for the UK’s future relationship with the EU. One is a refusal to pay the £39bn, the negotiated total financial settlement included in the draft withdrawal agreement. The other is a massive Salvini-style income-tax cut, in the form of an increase in the upper threshold for the lower tax rate of 20% from the current £46000 to £80000.

Shut Up and Dance Musical Tribute to Johnson

Prepare for No Deal

This is likely to come down to Hunt vs Johnson.

Prepare for Johnson and No Deal.