“After decades of neoliberalism, we are at the mercy of a cluster of cartels who are lobbying politicians hard and using monopoly power to boost profits.”

Joseph Stiglitz, The Price of Inequality (2012)

The emergence of think tanks was as much a symptom of liberal progress as it was a nervous reaction in opposition to it.  In 1938, the American Enterprise Association was founded by businessmen concerned that free enterprise would suffer at the hands of those too caught up with notions of equality and egalitarianism.  In 1943, it dug into the political establishment in Washington, renamed as the American Enterprise Institute which has boasted moments of some influence in the corridors of the presidential administrations.

Gatherings of the elite, self-promoted as chat shops of the privileged and monstrously well-heeled, have often garnered attention.  That the rich and powerful chat together privately should not be a problem, provided the glitterati keep their harmful ideas down to small circulation.  But the Bilderberg gathering, a transatlantic annual meeting convened since 1954, fuels speculation for various reasons, not least of all because of its absence of detail and off-the-record agendas.

C. Gordon Tether, writing for the Financial Times in May 1975, would muse that,

“If the Bilderberg Group is not a conspiracy of some sort, it is conducted in such a way as to give a remarkably good imitation of one.”

Each year, there are hushed murmurings and ponderings about the guest list.  Politicians, captains of industry, and the filthy rich tend to fill out the numbers.  In 2018, the Telegraph claimed that delegates would chew over such matters as “Russia, ‘post-truth’ and the leadership in the US, with AI and quantum computing also on the schedule.”  This time, the Swiss town of Montreux is hosting a gathering which has, among its invitees, US Secretary of State Mike Pompeo and President Donald Trump’s senior adviser and son-in-law Jared Kushner.

The Bilderberg Summit begins at the driveway – this year in Switzerland, at the hotel “Montreux Palace”.

Often, the more entertaining assumptions about what happens at the Bilderberg Conference have come from outsiders keen to fantasise. The absence of a media pack, a situation often colluded with by media outlets themselves, coupled with a general holding of attendees to secrecy, have spawned a few gems.  A gathering of lizard descendants hatching plans for world domination is an old favourite.

Other accounts are suitably dull, suggesting that little in the way of importance actually happens.  That man of media, Marshall McLuhan, was appalled after attending a meeting in 1969 by those “uniformly nineteenth century minds pretending to the twentieth.” He was struck by an asphyxiating atmosphere of “banality and irrelevance”.

The briefings that come out are scripted to say little, though the Bilderberg gathering does come across as a forum to trial ideas (read anything significantly friendly to big business and finance) that may find their way into domestic circulation.  Former Alberta Premier Alison Redford did just that at the 2012 meeting at Chantilly, Virginia.  In reporting on her results after a trip costing $19,000, the Canadian politician proved short on detail.

“The Premier’s participation advanced the Alberta government’s more aggressive effort to engage world decision makers in Alberta’s strategic interests, and to talk about Alberta’s place in the world.  The mission sets the stage for further relationship-building with existing partners and potential partners with common interests in investment, innovation and public policy.”

One is on more solid ground in being suspicious of such figures given their distinct anti-democratic credentials.  Such gatherings tend to be hostile to the demos, preferring to lecture and guide it rather than heed it.  Bilderberg affirmed that inexorable move against popular will in favour of the closed club and controlling cartel.  “There are powerful corporate groups, above government, manipulating things,” asserts the much maligned Alex Jones, whose tendency to conspiracy should not detract from a statement of the obvious.  These are gatherings designed to keep the broader populace at arms-length, and more.

The ideas and policies discussed are bound to be self-serving ones friendly to the interests of finance and indifferent to the welfare of the commonwealth.  A Bilderberg report, describing the Bürgenstock Conference in 1960, saw the gatherings as ones “where arguments not always used in public debate can be put forth.”  As Joseph Stiglitz summarises from The Price of Inequality,

“Those at the top have learned how to suck the money out of the rest in ways that the rest are hardly aware of.  That is their true innovation.  Policy shapes the market, but politics has been hijacked by a financial elite that has feathered its own nest.”

A nice distillation of Bilderbergism, indeed.

Gauging the influence of the Bilderberg Group in an empirical sense is not a simple matter, though WikiLeaks has suggested that “its influence on postwar history arguable eclipses that of the G8 conference.”  An overview of the group, published in August 1956 by Dr. Jósef H. Retinger, Polish co-founder and secretary of the gathering, furnishes us with a simple rationale: selling the US brand to sceptical Europeans and nullifying “anxiety”.  Meetings “unofficial and private” would be convened involving “influential and reliable people who carried the respect of those working in the field of national and international affairs”.

Retinger also laid down the rationale for keeping meetings opaque and secret.  Official international meetings, he reasoned, were troubled by those retinues of “experts and civil servants”.  Frank discussion was limited for fear of indiscretions that might be seen as rubbing against the national interest.  The core details of subjects would be avoided.  And thirdly, if those attending “are not able to reach agreement on a certain point they shelve it in order to avoid giving the impression of disunity.” 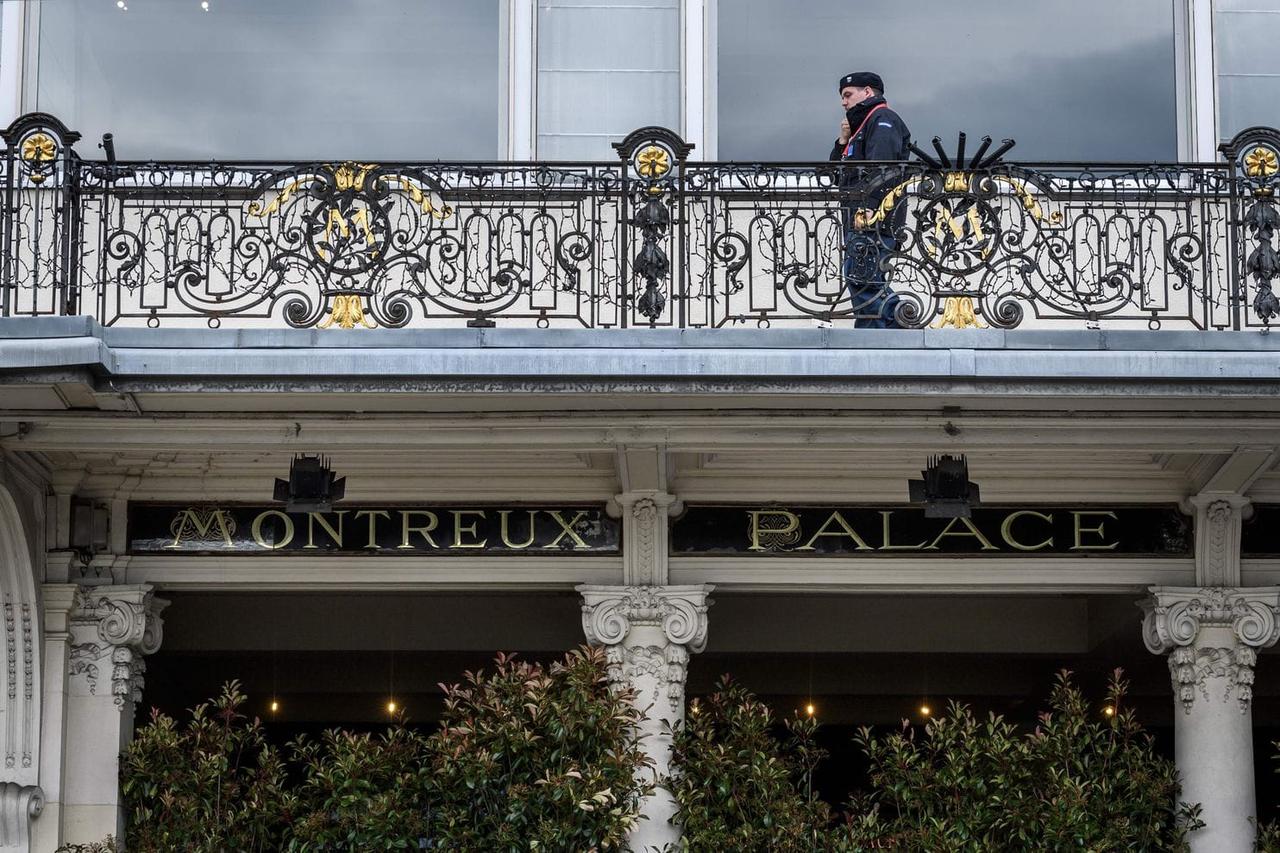 A security guard is seen May 29 above the entrance of the Fairmont Le Montreux Palace hotel in the Swiss town of Montreux, which is set to host the annual Bilderberg Meeting.

Retinger was already floating ideas about Europe in May 1946 when, as secretary general of the Independent League for European Co-operation (ILEC), he pondered the virtues of federalism oiled by an elite cadre before an audience at Chatham House.  He feared the loss of “big powers” on the continent, whose “inhabitants after all, represent the most valuable human element in the world.”  (Never mind those of the dusky persuasion, long held in European bondage.)  Soon after, he was wooed by US Ambassador W. Averell Harriman and invited to the United States, where his ideas found “unanimous approval… among financiers, businessmen and politicians.”

The list of approvers reads like a modern Bilderberg selection, an oligarchic who’s who, among them the banker Russell Leffingwell, senior partner in J. P. Morgan’s, Nelson and David Rockefeller, chair of General Motors Alfred Sloan, New York investment banker Kuhn Loeb and Charles Hook, President of the American Rolling Mills Company.  (Unsurprisingly, Retinger would establish the Bilberberg Group with the likes of Paul Rijkens, President of the multinational giant Unilever, the unglamorous face of European capitalism.)

Retinger’s appraisals of sovereignty, to that end, are important in understanding the modern European Union, which continues to nurse those paradoxical tensions between actual representativeness and financial oligarchy.  Never mind the reptilian issues: the EU, to a modest extent, is Bilderbergian, its vision made machinery, enabling a world to be made safe for multinationals while keeping popular sovereignty in check.  Former US ambassador to West Germany, George McGhee, put it this way: “The Treaty of Rome [of 1957], which brought the Common Market into being, was nurtured at Bilderberg meetings.”