Authored by John Crump via AmmoLand.com,

Since Friday’s landmark court decision that legalized magazines holding more than ten rounds in California buyers have been going crazy with purchases. 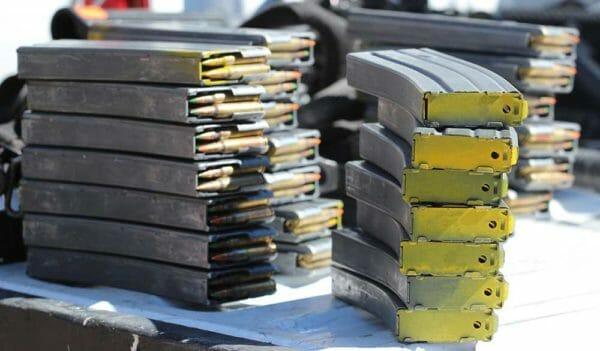 Most online retailers have resumed the sales of magazines of all sizes to the people of the Golden State. Rainier Arms has seen a significant uptick in traffic with most sales being for the Magpul Gen2 30 round magazine. This increase in internet transactions has even crashed Rainier Arms payment processing server.

“We received such an overwhelming surge of sales over the weekend, it actually crashed our merchant services, the website was fine, but our payment services were so overwhelmed it crashed,” said Aristotle Bartolome of Rainier Arms.

“With that said, we closed out a very strong weekend, and even with the chaos, we’re currently 48 hours behind on getting all of the weekend orders caught up and adjusting staffing to better support our customers getting their orders quicker.”

Rainier Arms isn’t alone in their increase in sales. Brownells is also reporting an increase in magazines sales to California. They are seeing residents “stocking up” on AR15 magazines as well. Brownells is one of the largest gun retailers on the web.

California residents are in a rush to buy up magazines before the state can appeal U.S. District Judge Roger Benitez’s decision to the Ninth Circuit Court. The judge’s decision stunned the California Attorney General and the gun community as well. It went further than either side anticipated.

One California resident, Adelaide Golden, told me that she thinks that all gun owners in the state need to take advantage of the opportunity to purchase standard compacity magazines while they are shipping to the state.

“In a national and local environment that is increasingly hostile to responsible gun owners, it’s important to take advantage of opportunities that present,” Golden said.

“With the overturn of unconstitutional limits on magazine sizes, I, as a California resident, can finally have standard size magazines that can make a small difference at the range and a huge difference if I’m ever forced to defend myself or my home.”

Some gun owners were worried that the price of magazines would increase with the potential run on the product. Primarily this increase in price hasn’t happened. In fact, a lot of websites are running deals for California residents. Companies are there to make a profit, but it seems like a lot of companies are taking this opportunity to spread the message of liberty.

Brownells is trying to flood California with AR15 magazines. The firearms retailer is currently selling 10 packs of 30 round Magpul GEN2 magazines for $99.99 which saves the residents $30.

Elite Tactical Components are also helping out the people of the state but are focusing on the AK market. That site is selling blem 30 round XTech MAG47 magazines for only $10. The deal is just for residents of California.

Other websites have followed suit by offering California specific deals, but as soon as the sales go live, the companies sell out of their stock of gun magazines.

Natchez Shooters Supplies sold out of a lot of magazines due to the increase in sales from California. When the ruling came down, they put together an email to send out to their customers. Business was so brisk for the company that they had to redesign the email due to selling out of a lot of their magazine products that were going to be featured in the email.

There is no telling how many magazines retailers have shipped to California since the judge lifted the ban on the sale of standard capacity magazines. One sure thing is that residents of the state are taking advantage of the new ability to defend themselves by buying 10+ round magazines at a record pace.