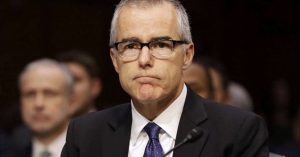 I’m guessing you would think that it could lead to an indictment and more than likely a jail sentence at the conclusion of an investigation. That’s not what happened to fired FBI Deputy Director Andrew McCabe who lied to investigators multiple times, while he was under oath. The now CNN contributor, has instead received a settlement deal with the FBI and his government pension fully restored by the Biden Justice Department.

McCabe, 53, filed the lawsuit in 2019, claiming that he was targeted and fired for political purposes. His claim couldn’t be further from the truth. But does the truth really matter? Over the past five years we’ve witnessed what lies, deception and power can do to a nation. In my opinion, Justice has been taken hostage by bureaucratic elites who discovered they could get away with weaponizing the most powerful agencies in the United States against political opponents. Who could hold them accountable, especially if those employees are working for the same agencies we rely on for accountability?

The irony, is that the FBI’s entire case against President Donald Trump, was predicated on lies that those powerful bureaucrats established behind closed doors and then leaked to friendlies in the media. They did so for political purposes and those lies were allowed to become a mirage of truth when the elitist media, which should be a watchdog against the government, became another weapon in their arsenal against the American people.

How do we know this? Remember the Office of Inspector General’s scathing report on McCabe in February, 2018 ? Maybe you don’t remember, because like columnist Byron York recently wrote for the Washington Examiner, the DOJ is attempting to dump the report into a memory hole.

The department settled McCabe’s suit and agreed to pay him $200,000 in back pension benefits. They’re giving him the cufflinks and the plaque — and they are expunging his record of any mention of that firing unpleasantness. Just for good measure, the FBI — that would mean you, the taxpayer — is also paying McCabe’s lawyers $539,000 in fees.

At the time, Department of Justice (DOJ) Inspector General Michael E. Horowitz concluded in his report that McCabe had “lacked candor” on four occasions when questioned by federal agents about leaking information to a reporter. Basically, he lied to investigators. McCabe also leaked information to the media. Specifically, Horowitz revealed that he authorized the disclosure to the The Wall Street Journal in October 2016.

“We also found that McCabe’s actions contemporaneous with the disclosure in October 2016, as well as those following it, reflected an understanding by McCabe that his authorization of the disclosure was not consistent with FBI policy. For example, on October 30 and November 4, following publication of the WSJ articles referencing his authorized disclosure about the PADAG conversation, McCabe called the NY-ADIC to complain about the CF Investigation leaks contained in those stories, without mentioning that he had authorized an anonymous disclosure rebutting the leaks and confirming the CF Investigation. Then, when questioned about the disclosure by INSD agents in May 2017, McCabe issued false denials regarding his involvement in it. Further, after it became apparent that the OIG knew about his role in the disclosure, McCabe sought to legitimize his actions by falsely claiming that he had told (former FBI Director James) Comey that he authorized the disclosure and that Comey was fine with his decision.”

When McCabe was fired by former Justice Department Attorney General Jeff Sessions he immediately retained a lawyer and called his firing unjust. But mind you, McCabe has put people in jail for lying to the FBI, just as he lied to the Inspector General. It just seems that he believes he’s immune to the same treatment. In fact, it was the IG that pointed that McCabe’s lies went as far as attempting to throw his former boss FBI Director James Comey under the bus, saying it was Comey who authorized him to leak  information to the media. Comey denied McCabe’s recollection of events.

What about the information recently revealed by the Special Prosecutor John Durham, exposing again a major piece of the puzzle revealing that the Russia Trump collusion hoax was concocted by Clinton supporters to target Trump. Trump had always denied all the accusations lobbed at him and his campaign by McCabe and those working with him at the FBI.

This September, after a lengthy and ongoing investigation by Durham, a federal grand jury in Washington, D.C., indicted Clinton’s former attorney Michael Sussmann for making false statements to the FBI. His indictment was for lying to the FBI about the the existence of an alleged secret communication channel – a ping discovered – between Trump’s servers and a Russian bank.

It was another lie. It was a lie to attempt to connect Trump to Russia but one that was eventually debunked by FBI investigators. But it was a lie that was set free in a planted story with Franklin Foer at Slate magazine. He first wrote the story about the Trump computer server and Alfa Bank on October 31, 2016. Hillary Clinton then retweeted Foer’s story.

But what about the FBI? How is it possible that the FBI had no idea at the time who Sussmann was working for and for that matter who he represented? It was the same bogus scenario with everything surrounding the investigation into Trump. The elites clammed up, said nothing and pointed the finger at everyone else around them. In the end, they would cover for one another’s transgressions at the expense of the American people and our established legal system.

First, as far as Sussmann is concerned, he worked at the time for Perkins Coie. He had once been the attorney for the Democratic National Committee’s attorney. His law firm was also the firm that hired private security firm Fusion GPS, which paid for the now debunked dossier compiled by former British spy Christopher Steele against Trump, as first reported by The Washington Post.

Durham’s charges allege that Sussmann was lying to the FBI general counsel in claiming that he was not bringing forward the information on behalf of a client. McCabe and Comey’s FBI claim that they were unaware of that Sussmann or Perkin’s Coie for that matter were working on behalf of the Democrats.

Durham’s investigation alleges that Sussmann passed the FBI the faulty information on the servers on behalf of his client Hillary Clinton’s presidential campaign and a tech executive.

What about the lies in the Steele dossier, accusing former Trump campaign volunteer Carter Page of being a spy for the Russian government. Those lies, which were also leaked to the media, almost destroyed Page’s life. Page, on the other hand, had been cleared by the CIA early on during the FBI’s investigation. We know that based on documentation that was released during the Congressional investigation into the Russia Trump scandal. Those documents revealed that Page was never working on behalf of the Russians but instead providing information to the CIA. This should have never been made public but it was the only way for Page to clear his name after being defamed by the FBI and others who leaked lies about him. Moreover, Horowitz had stated in his report that FBI investigators and lawyers, all who worked for McCabe and Comey, had no reason to issue a secret warrant under the Foreign Intelligence Surveillance Act to spy on him.

Because of ongoing litigation Page could not respond to this article for comment.

Tragically, Page has not received any compensation for what has happened to him. His name was dragged through the mud, he was exposed, his life was threatened multiple times and he is still in litigation against those who targeted him.

What are the American people to conclude from what happened with McCabe? What has happened to our government?

Did McCabe get preferential treatment from a bureaucracy that had been carefully established for decades to protect one-another from the same system they use to target the rest of us?

Yes, he did. We can’t be afraid to tell the truth and expose the reality that we are divided class in our nation. If we don’t admit the truth we can never correct what is wrong. We need to correct it. We need to expose it. Our agencies and their employees need to be held to the highest standards.

It’s going to be up to those inside the Department of Justice, like Durham, to expose the criminals within and hold them accountable. If we don’t our Constitution, our laws are not worth more than the paper they are written on.