The left has a new obsession… Modern Monetary Theory (MMT). 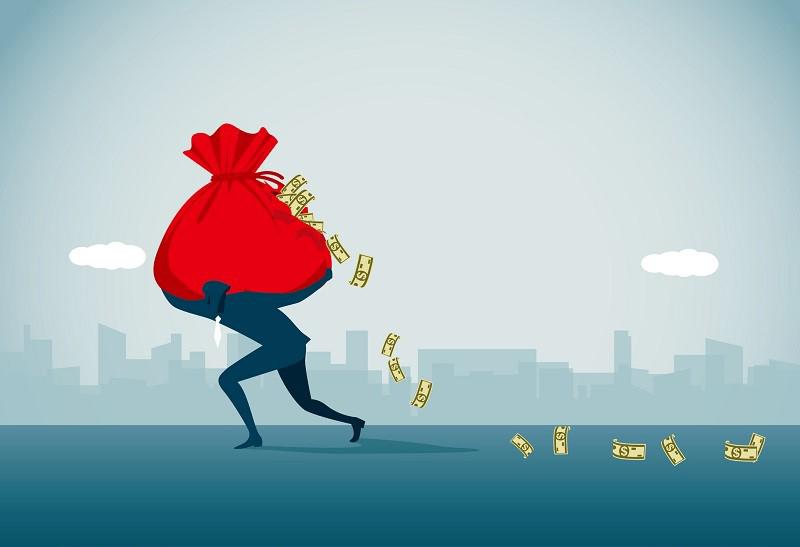 MMT is an economic theory which essentially argues that the U.S. government wouldn’t need to collect taxes or borrow money to finance spending. It could simply print more money if necessary.

Now, this concept isn’t new. It’s been around for decades. But its popularity has skyrocketed, thanks to endorsements from Democratic presidential candidate Bernie Sanders and Congresswoman Alexandria Ocasio-Cortez (AOC), the new rising star of the Democratic Party.

This new breed of socialist Democrats has embraced MMT because it would make all their crazy ideas possible. The national debt, deficits, and inflation concerns would no longer stand in the way of projects like the Green New Deal or universal healthcare/housing/education.

In short, MMT would give the government a green light to spend money even more recklessly than it does now. That’s a problem.

Justin: Doug, what do you make of Modern Monetary Theory? Would this economic framework help or hurt the U.S. economy?

Doug: MMT centers around the notion that the economy in general, and money in particular, should be the creatures of the State. It’s not a new idea – the meme has been around in one form or another since at least the days of Marx. MMT basically posits that the wise and incorruptible solons in government should create as much currency as they think is needed, spend it in areas they like, and solve any problems that occur with more laws and regulations.

It’s nothing new. Just a more radical version of the economic fascism that’s dominated the U.S. since at least the days of the New Deal. It’s just another name for an old, and very stupid, set of economic ideas. By stupid I mean, “showing an inability to predict the indirect and delayed consequences of actions.”

Politicians are now talking about the supposed benefits of MMT. Pseudo-economists are doing their abstruse and incomprehensible mathematical computations about how it might affect the economy. The public will easily be convinced they’ll get something for nothing.

But what we should be talking about here is moral principle. It’s not a question of whether MMT will work or not work. It won’t. It will work about as well as the economic policies of Venezuela and Zimbabwe. Or Argentina, where I am at the moment. These schemes have never worked in all of history. They result in a vastly lower standard of living, along with social strife.

MMT is about radically increased government control. The argument shouldn’t be over whether MMT will “work” or not. The argument should be about whether it’s moral and proper for people in the government – whether elected or appointed – to print money to change the economy into something that suits them better.

Justin: It’s obvious that you find MMT, like other interventionist economic theories, to be immoral. Why is that?

Doug: Money represents the hours of your life that you spent earning it. That’s the basic principle here. It represents concentrated life – all the things you want to have and do for yourself, and provide for others in the future. When these people destroy the value of money, they’re destroying part of your life.

“Inflation” isn’t caused by greedy butchers, bakers, and gasoline makers. It’s caused by an excess of purchasing media. MMT will give the State total control of its quantity and quality. If the government increases the money supply by, say, 10 times, general prices will go up by 10 times. The value of your dollar savings will drop 90% – perhaps most Americans won’t care, because they have no savings, just debt.

In any event, some people will get hold of a lot more of that 10x increase than others. And they’ll get hold of it earlier, before prices really take off. Who? Inevitably cronies.

Look, absolutely every government intrusion into the economy – whether it’s taxes or regulations or inflation – always benefits the people in and around the government. And damages society as a whole.

But they’re sold to the voters, to the hoi polloi, to the “head count,” as something that will put them on easy street. Which is a lie, of course.

But that’s not what the argument should be about. The average guy doesn’t understand economics; he doesn’t think, he feels. Furthermore, nobody talks about whether cockamamie ideas like MMT are morally right or wrong. Instead, they have pointless and ridiculous arguments about whether it works or not. Well, it doesn’t work. But that’s a distraction.

This matter is essentially a moral question, not a technical question. Does somebody in government have a right to determine your economic destiny? Or not?

The fact that Alexandria Ocasio-Cortez [AOC] – an ambitious, terminally ignorant, morally crippled 29-year-old Puerto Rican bartender – is setting the tone for this whole discussion tells you how degraded the U.S. has become. It’s well on its way to turning into a giant welfare and police state.

But, as you know, I always look on the bright side. Which is that – if you give yourself a little psychological distance – this is all a comedy. AOC, The Donald, Bolton, Bernie Sanders, Pocahontas, Hillary, Kamala, etc., etc. They’re all dangerous megalomaniacs. But the chimpanzees listen to them, choose teams, hang on to their every word, support them, and are easily incited to hoot and pant at each other. The American public is going to get exactly what it deserves. I have no sympathy for them. Or about as much as I would have had for the Romans in the fifth century, when the empire was collapsing.

Justin: Doug, you’re correct to point out that AOC has endorsed MMT. Stephanie Kelton, Bernie Sanders’ economic advisor during his last presidential run, is also a proponent of MMT. So this idea is gaining traction with Democrats.

That said, what are the chances MMT or some version of it gets implemented?

Doug: Interesting. It may be the first thing Summers has ever been right about in his whole life. As for Powell, he’s a non-entity, a lifelong bureaucrat plucked from obscurity – for God knows what reason – by The Donald. Trump has bizarrely bad judgment in the people he surrounds himself with. From that silly woman who was on The Apprenticewith him, to his lawyer Cohen, to Jared and Ivanka, Bolton… it’s like he goes out to the highways and the byways to round up the lame, the halt, and the philosophically blind. Regardless of his rhetoric, he’s very partial to warmongers and Deep State types.

But back to MMT. The chances of MMT being implemented are extremely high. It will almost certainly happen, at least after the next election, for several reasons.

One, the government is now running a deficit of roughly $100 billion a month; that will soon be $200 billion. They’ll be desperate for more revenue, which MMT will give them. Second, with demographics – the youth and non-white voters – as they are, the Democrats will get a lot more traction in 2020. Third, the U.S. will be in the midst of a gigantic crisis; it will be blamed on Trump, regardless of how much of it’s his fault. There are a number of other reasons the Democrats will win. But that’s a subject for another conversation.

They’re going to try every cockamamie idea they can to keep the ball rolling. Lots more controls of all types. More debt. More inflation. MMT is just going to be part of it. I don’t doubt they’ll try for a Constitutional Convention. It’s going to be a desperate situation, ending in a catastrophe. Not in the distant future but the near future. We’re on the cusp of the Greater Depression.

The only good news – and it’s super good news – is that science and technology have advanced as well. That’s maintained the general standard of living. Unfortunately, the State always gets first dibs on tech developments, and uses them against society. This long-term trend is now going hyperbolic.

The next big example of this is the Social Credit System being implemented in China. And soon everywhere else. It’s a pity that philosophy and morality have meanwhile only advanced at a snail’s pace. In fact, they’ve been going backward. It’s a very dangerous situation when we’re talking about nuclear, and even more advanced, weapons.

The bottom line? You can practically plan your life around their grasping the straw of MMT.

Justin: Doug, I know you object to MMT on moral grounds. But let’s face it. Most people don’t see monetary policy this way. They believe the Fed should play a role in guiding the economy, whether it’s through setting interest rates or adjusting the money supply.

Could you tell me why MMT would be better or worse than the current economic framework that the Fed employs?

Doug: Yes. Abolish the Fed, and the system of fractional reserve banking. Reduce the size of the U.S. government by about 90%. Default on the national debt, so that future generations of Americans aren’t made into serfs… there are a number of things.

But the chances of a change in the long-term trend at this point are approximately zero. Put it this way: The chances are slim and none. And Slim’s out of town.

Justin: Doug, proponents of MMT say it would work because of the U.S. dollar’s status as the world’s reserve currency. Basically, they argue that the U.S. borrows in its own currency. Therefore, it can’t go bankrupt because it can just print more dollars when it needs to. What’s wrong with this thinking?

Doug: The U.S. dollar isn’t going to remain king forever. It’s in the process of being dethroned as we speak.

The Chinese, the Russians, and basically every other major economic power on the planet want to get rid of dollars. They realize dollars are the unbacked liability of a bankrupt government, even at this point. They don’t like having to use the dollar every time that they want to transfer assets. They don’t like the fact that everything they buy and sell in dollars has to be cleared through New York and is monitored by the U.S. government – their enemy. They understand how foolish it is to keep sending real goods to the U.S. in return for paper dollars, printed in unlimited amounts.

I suspect the rest of the world – believe it or not – is going back to gold. Simply because a trustworthy money is needed. They don’t trust each other’s currencies any more than the dollar.

At this point, the question from a practical point of view is, “What should you do with your money?”

You should own a lot of physical gold and silver. Keep a lot of it outside your home country. At some point within the lifetime of most people reading this right now, the dollar will lose all its value. It’s really serious.

Of course, I’ve been predicting gloom and doom for many years. It’s happened in slow motion, not an instantaneous catastrophe.

We’ll see what happens as we enter the trailing edge of the storm. Likely later this year.

Justin: Thanks for taking the time to speak with me today, Doug.