Authored by Amir Taheri via The Gatestone Institute,

Talking to European think-tankers and policymakers in recent weeks, one gets the impression that, seen from Europe, Iran is a recurring nightmare that everyone wishes would go away. A couple of years ago, many in Europe believed that it had faded into oblivion. Now, however, the nightmare is back with a vengeance, with drums of war beating in the background.

The truth is that, apart from wishing it would go away, the European Union has never had a coherent policy for dealing with the nightmare. Eight years of President Barack Obama’s dancing around the Iran issue enabled the Europeans to postpone serious analysis of the situation in the Islamic Republic.

That, in turn, seems to have led the Europeans to gingerly rally to the hardline posture adopted by the Trump administration in Washington. Judging by the current discussions in European policy circles, the European powers may well throw their weight behind Trump’s policy of “maximum pressure” during the forthcoming G7 summit in France in August. 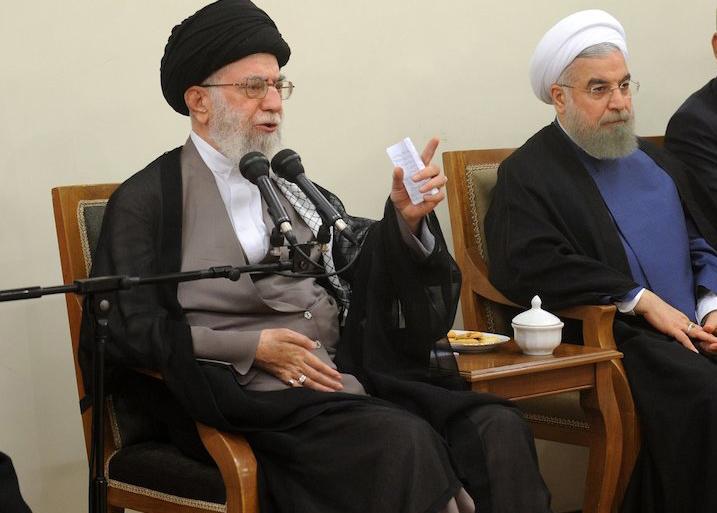 If the regime of the Islamic Republic of Iran collapses, who will take the reins and make sure that the vast country does not morph into yet another “ungoverned territory” in the heart of the Middle East? Pictured: Iran’s Supreme Leader, Ayatollah Ali Khamenei (left) and President Hassan Rouhani. (Image source: khamenei.ir)

The first is that the policy, ostensibly aimed only at persuading the Khomeinist leadership to change its behavior on some foreign policy issues, may, in fact, lead to systemic collapse in Iran and produce regime change with unforeseeable consequences.

The question is: who will take the reins in Iran and make sure that the vast country does not morph into yet another “ungoverned territory” in the heart of the Middle East?

I think the question is designed to dodge the issue of confronting a rogue regime that has provoked the current crisis. Iran has an old and well-established bureaucracy, dating back to the 16th century, and capable of operating within a strong culture of governance. Despite the serious damage done to state structures by the mullahs and their acolytes, the reservoir of experience and talent available is vast enough to ensure governance even on autopilot.

The second concern is that regime change in Iran may trigger an avalanche of refugees ultimately heading for Europe at a time EU nations are still grappling with problems created by the influx of Syrian refugees. Iran’s population is almost four times that of Syria, which means Europe may face four times as many refugees. However, that concern too may be unwarranted.

To start with, Iran has been a source of refugees from the first days of the Khomeinist regime. Right now, over eight million Iranians, about 10 percent of the population, are in exile, mostly in Europe and the United States, according to Iran’s Foreign Ministry. Replacing the present regime by something less obnoxious may, in fact, inspire a reverse flow by Iranian exiles returning home. Something like that happened in Iraq after the fall of Saddam Hussein. In the first five years after liberation, an estimated 3.2 million Iraqi exiles, half of them in Iran, returned home.

History shows that nasty regimes produce refugees in the first decade of their existence. We saw that in Cuba after Fidel Castro seized power. Today, a change of regime in Havana will almost certainly lead to a return of some Cuban exiles, and not to a new outflow of refugees. The Syrian situation is exceptional. The popular uprising against the Assad regime was not allowed to succeed because Russia and the Islamic Republic intervened to crush it.

In the case of Iran, it is unlikely that Russia would want, or be able, to repeat the Syrian scenario to save the mullahs. Also, there is no one to assume the sidekick role that the Islamic Republic played in Syria.

The third concern that Europeans express is that Trump’s “proximity pressure” strategy may lead to war. In that context, some Europeans claim that it is fear of war that fans the fires of fanaticism in Tehran.

One senior European official tells us that the Islamic Republic is behaving aggressively because it feels surrounded by “huge numbers of American troops”.

In contrast, in the same putative glacis, the Islamic Republic has over 100,000 troops, including Afghan, Lebanese, Iraqi and Pakistani mercenaries in Syria and Iraq, not counting Hezbollah and Houthi units in Lebanon and Yemen.

Nevertheless, the possibility of war cannot be discounted.

A Persian classic on statecraft and warfare, says “words are the first arrows shot in a war.” The mullahs and their henchmen have set unimaginable records in the number of anti-American “word-arrows” shot every day. On the American side, John Bolton, Mike Pompeo, and Brian Hook return the compliment with interest.

However, a war of words could also lead to real war. In the “Melian Dialogue”, Thucydides shows how the war of words between Athens and Sparta and constant military preparation in the island of Melos, ended up igniting the Peloponnesian War (431-404 BC).

In the 15th century, the kings of Portugal and Spain went to war over the ownership of an island that was later found out to have been put on the map by a map-maker’s mistake. Peace came when the Portuguese agreed to cede the non-existent island to the Spaniards.

The mullahs are playing with fire and, “He who plays with fire risks being burned!”