Authored by Sven Henrich via NorthmanTrader.com,

On Thursday markets nearly broke their uptrend from the December lows, but once again a magic Friday overnight gap up driven by renewed hopes for an imminent China-US trade deal and supported by 9 Fed speakers trampling all over themselves to out dove each other alongside a flood of buyback money accelerated markets to a new weekly closing high. I say again because markets have become as boring as predictable: 9 weeks of consecutive gains, 9 risk free Fridays associated with a persistent crush of volatility and a virtual non existence of 2-way price discovery.

It is the trifecta of dovish central banks, hopes for a China trade deal, and a massive acceleration in buybacks that keep pushing markets higher on an ever narrowing highway to the danger zone and investors are throwing caution to the wind despite a continued deterioration in the global macro economic data.

From my perch nothing’s changed in the larger outlook and the rally is to be viewed with extreme caution and I recognize that I’m probably one of last people still out there raising any concerns.

Wall Street is now massively bullish with nearly half of analysts calling for new highs into the 2950-3250 $SPX range later into this year. And, frankly, as long as the trifecta maintains control over price who is to argue otherwise?

After all, market performance has been a key driver of the Fed’s decision to reverse policy, not only hinted at in the Fed minutes, but explicitly outlined by Fed governor Bullard this week:

“We did get a bad reaction in financial markets. I think the market started to think we were too hawkish, might cause a recession…I think all of this weighed on the committee and got people to change their thinking….the normalization process in the United States is coming to an end”.

It’s as much straight talk as you will get from the Fed. What this all means is what critics like myself has been saying for a long time: The Fed needs rising markets for a growing economy. Market performance and economic performance have become so intertwined that the Fed’s primary mandate, admitted or not, involves preventing or minimizing market drops. A crash would bring about a recession and hence Bernanke stepped in again in 2011 and 2012  following the initial QE1 program, hence why Janet Yellen paused rate hikes in February 2016, hence why Powell stopped rate hikes now. All for the same reason, all at the same time: Coinciding with dropping markets.

And hence we’ve morphed into a financial system that is never allowed to price in the reality of its underlying fundamentals so afraid are they of the consequences of the baseline, and this is why ever more debt is needed to sustain it.

And it’s of course not just words by central bankers that driving the action, there’s actual easing going on in some parts: 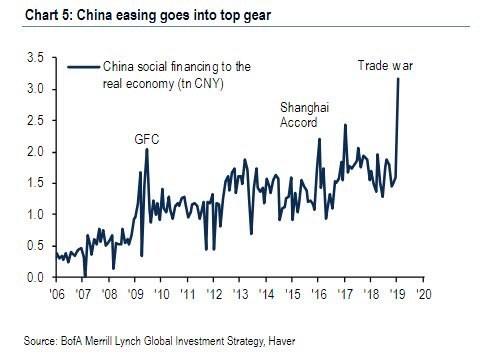 China is highly engaged in adding liquidity to its economy and anticipation of an imminent trade deal is running hot and markets are jumping on every headline. Generally the consensus appears to be that any deal is good news no matter the substance. We shall of course see about that and the March 1 deadline looks to pass next week with all eyes on the Trump Xi meeting now set for March. It may well be that investors see no reason to sell until such a deal is announced.

Buybacks are currently running 91% above the pace of even last year and at this point a new record in buybacks is slated to flood markets in 2019: 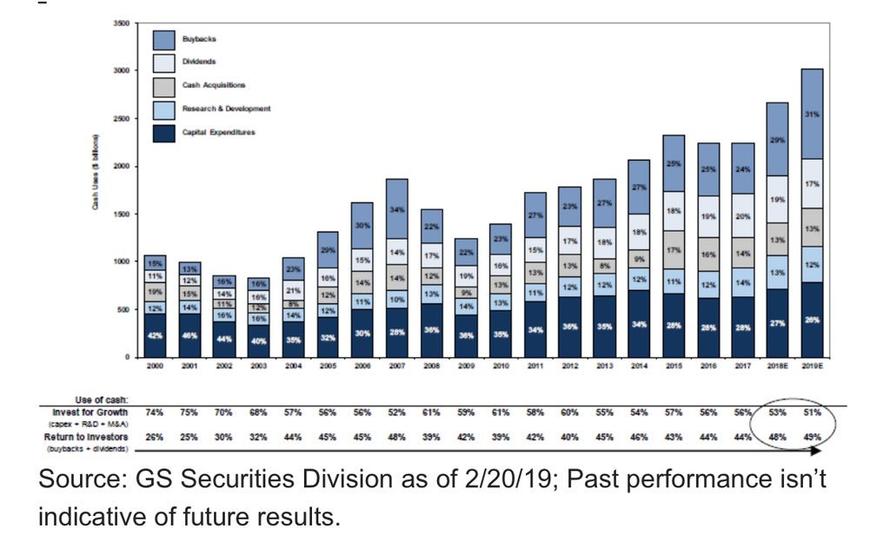 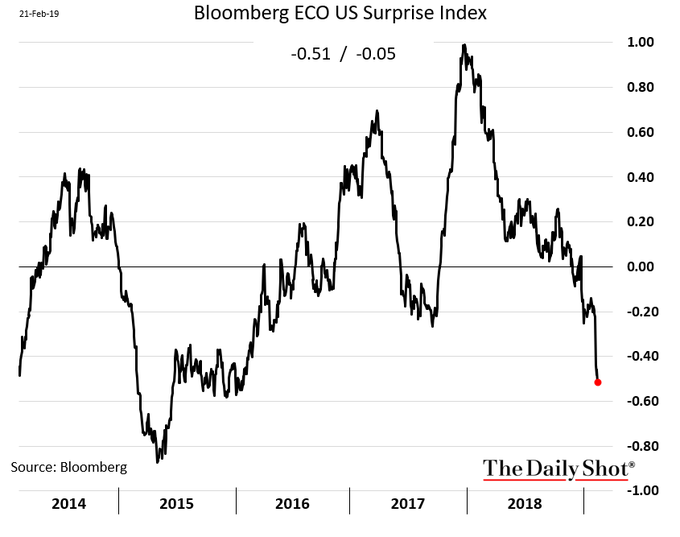 Nor seems to matter a declining to flat earnings growth reality. Via Fact Set: “Looking ahead, analysts predict a decline in earnings for the first quarter (-2.7%) of 2019 and low single-digit growth in earnings for the second (0.7%) and third (2.2%) quarters of 2019”.

And hence it is no surprise we get headlines such as these:

After all indices such as the $DJIA keep climbing week after week and are not too far from all time highs now:

Oh wait, that’s the wrong chart.  That’s the $DJIA chart from 2001 when optimism came back following the initial thumping in 2000. Did it mean anything? Was it predictive of higher prices to come? Did the relentless buyers knew what they were doing? The answer is of course a big fat no:

A recession was coming, but the signs were ignored at the time.

For weeks markets rallied relentlessly in early 2001. The worst was over, new highs were coming and slowing growth was ignored.

Are we looking to see a repeat here? From my perch it’s way too early to tell still, but I remain open to the possibility as long as this rally remains untested. Without a successful stress test of the rally and improving fundamental data I view this vertical and overbought rally with extreme caution.

Last week I outlined the next higher risk zone to be in the 2800-2820 range and this remains to be the case:

Could a successful conclusion to a China trade deal spike markets higher? Sure. 2875? Anything’s possible in this climate I suppose. Something being possible however does not equate to it being probable. As it stands, without a prior retest first such a spike would remain a technical sell from my perspective.

A proper retest would involve a successful defense of the indicated support zone below following a reversal either from here or from the point when this rally does break lower:

Remember in the 2001 $DJIA example above the initial retrace was met with weeks of bounces/consolidation before a solid break lower.

This week I’ve outlined the case for a coming $VIX spike and target which would fit with the retest scenario and $SPX has now tagged its rising thin red line.

The vertical and very one sided nature of this rally continues to exacerbate overbought conditions:

$BPSPX at the highest RSI reading in years totally void of any 2 way price discovery: 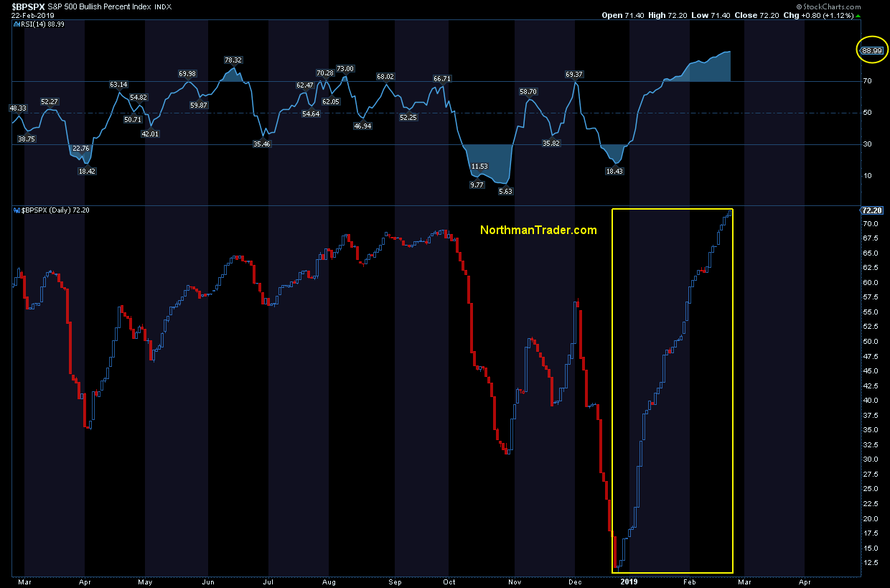 $NYSI jammed to the hilt: 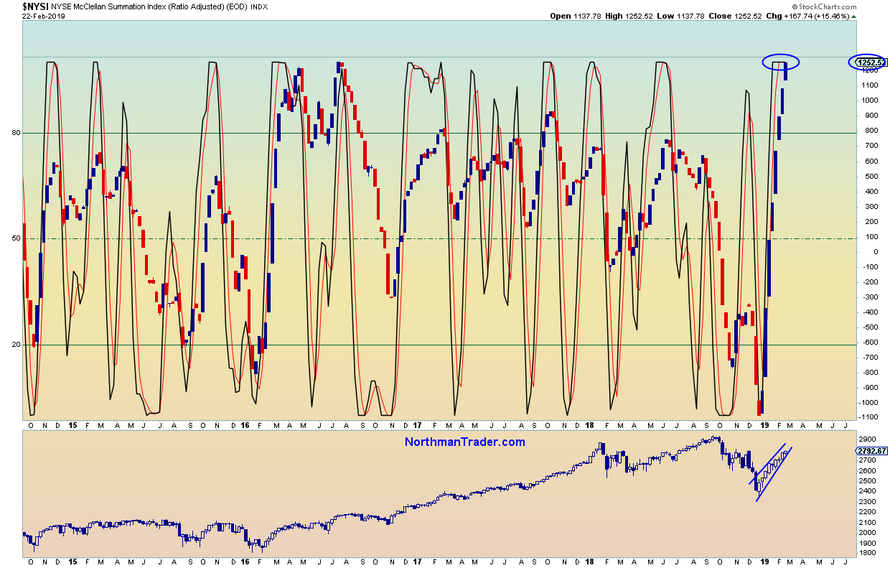 $NYMO with a complete lack of breathing to the downside in all of 2019: 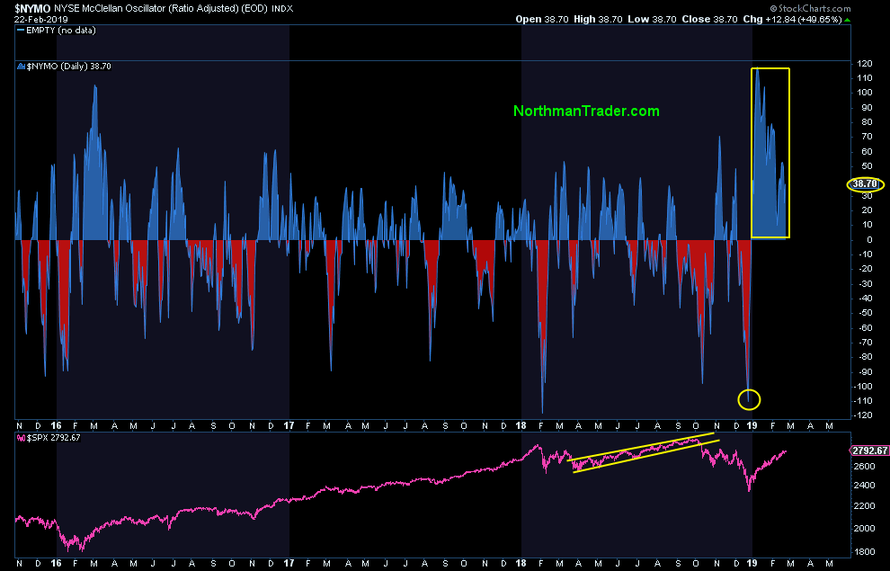 None of this is “normal” 2 way price discovery, none of it is sustainable for the rest of year, if anything it’s a one way ticket onto the highway to the danger zone supported literally by junk: 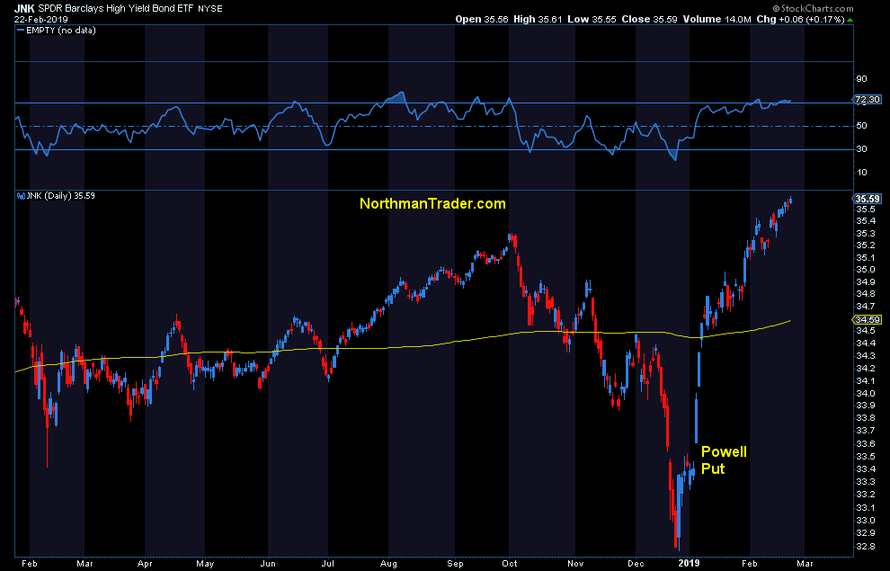 In addition to overbought readings it is the pattern structure of these charts that scream caution to me as markets continue to set up for a repeat of recent breaks: 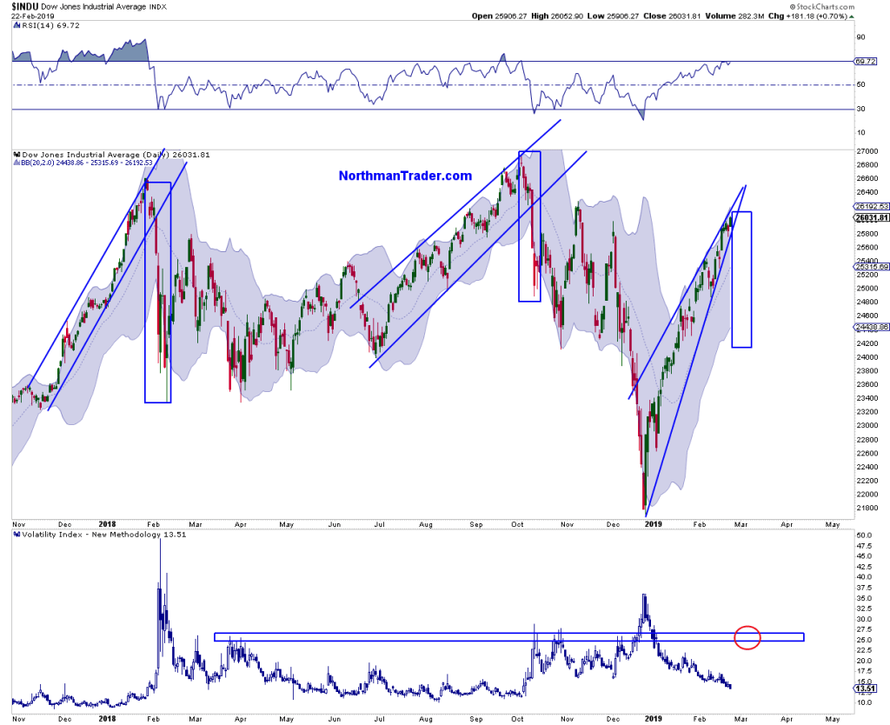 Steep rising wedges can extend, but usually end up in an aggressive break lower and volatility continues to suggest a break higher to come: 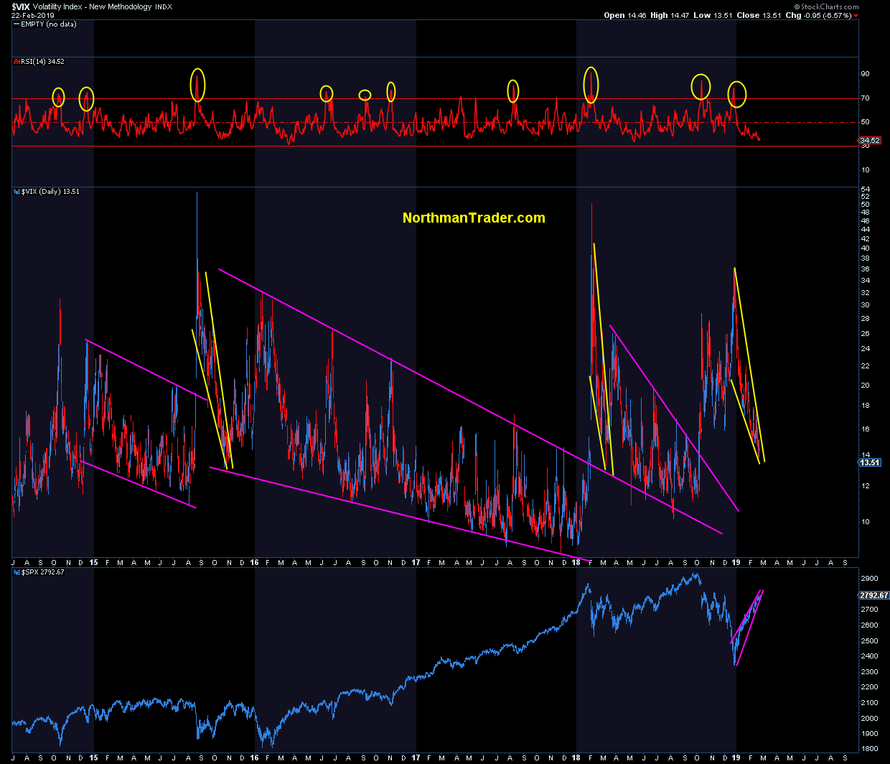 I maintain that this aggressive price action back and forth is not a sign of market stability.

Rather it’s a sign of instability leaving room open to a repeat of a larger bearish repeat:

One other concern about this rally: Its reliance of ever more unfilled gaps below in context of a rising wedge: 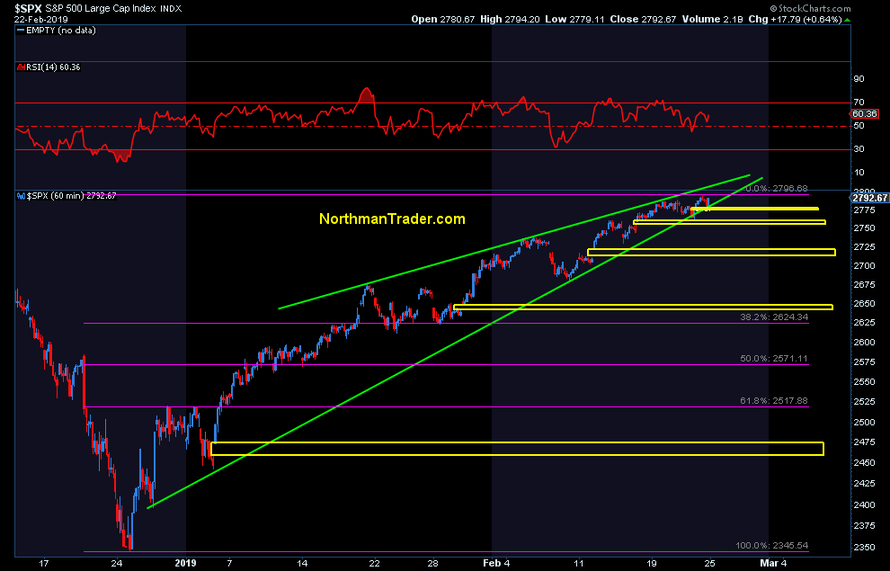 It’s my premise that many, if not all, of these gaps will eventually fill. That was my premise in January 2018 as well and it is my premise here.

Extremely steep rallies with wedge patterns will get tested: 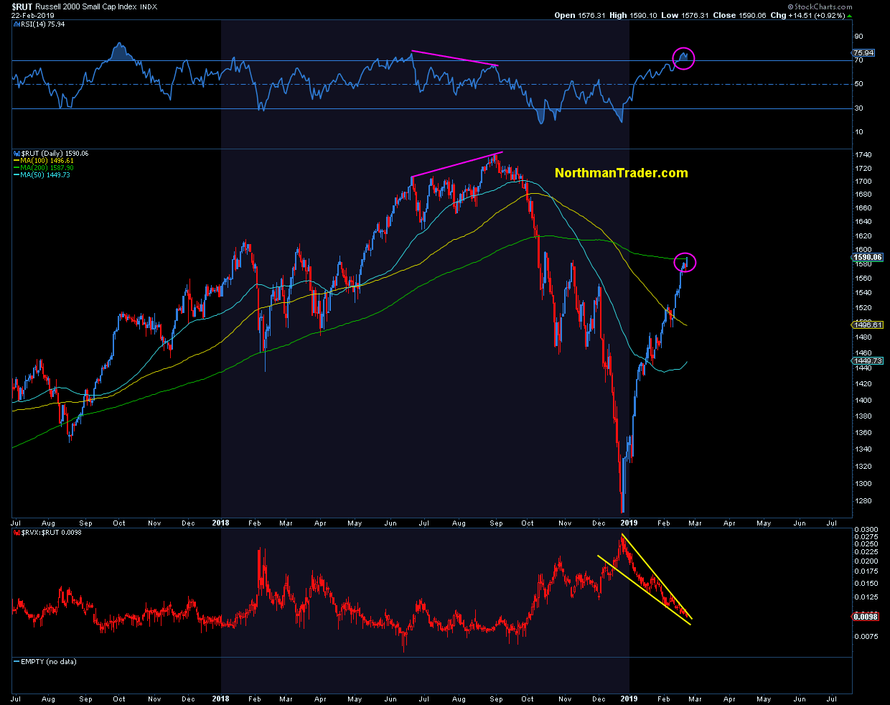 And it is at the time of the test when the ultimate direction of this market will get decided: 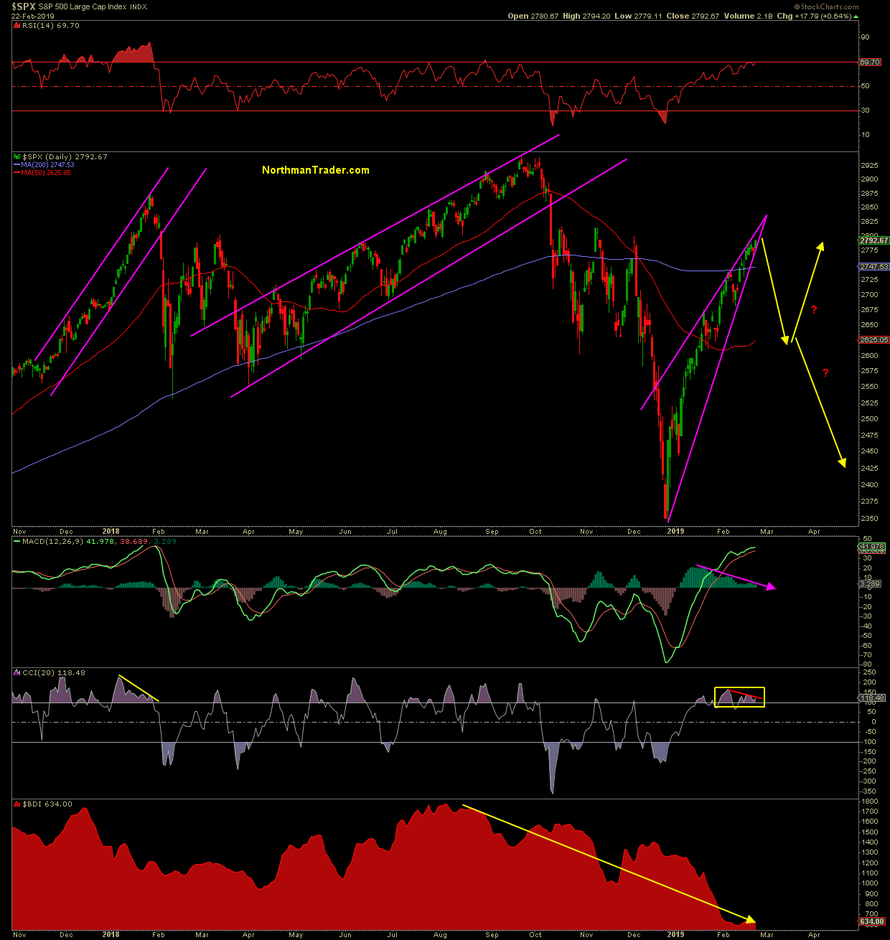 If people think this market is risk free just because it’s acting like there’s no risk I’ll just highlight one $DJIA component with its yearly chart:

Yes it’s a linear chart but that doesn’t change the reality that the stock is trading 46% above its yearly 5EMA, entirely disconnected for its 2nd year in a row which has exactly happened never before. Never is a long time.

So if people want to ring the all clear with charts like the one above floating around, go right ahead. It’s the same reckless technical nonsense that got investors into trouble in 2019. This market remains historically extended and not cheap. Warren Buffet can’t find anything to buy:

“In the years ahead, we hope to move much of our excess liquidity into businesses that Berkshire will permanently own. The immediate prospects for that, however, are not good: Prices are sky-high for businesses possessing decent long-term prospects”

So there you have it. The trifecta of central banks, China trade deal hopium and buybacks keeps supporting equities while global macro and the earnings picture continues to deteriorate. The rally remains untested and while that is the case strength remains a sell from my perspective. Only at a point of a technical retest can one ascertain the true strength of this rally. The bull trap scenario has not been invalidated as of yet.

For next week the same upper risk zone of 2800-2820 applies. Markets enter this week even more overbought with even more open gaps below leaving markets vulnerable for a risk-off event to bring about the technical retest.