As Russians celebrate Victory Day, George Galloway argues for a return to the spirit that won the war. 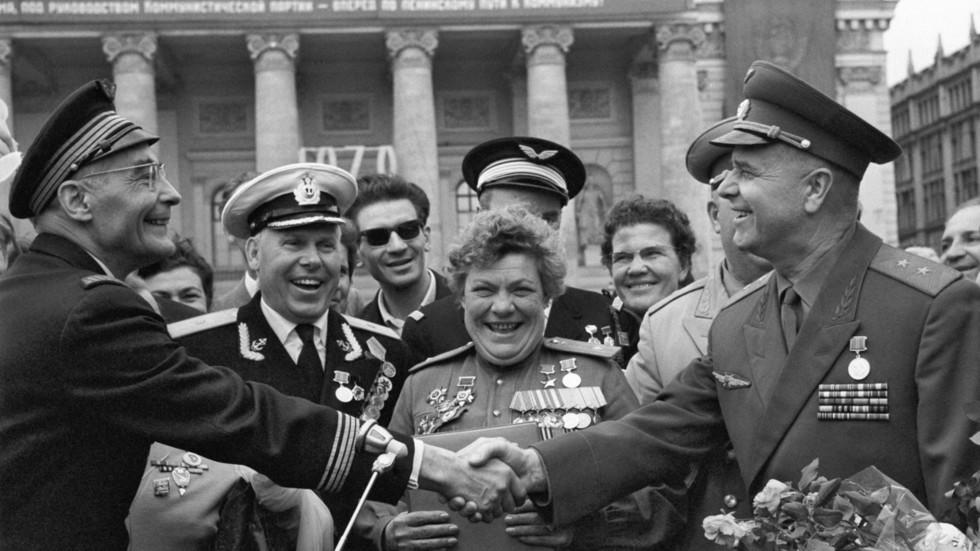 On May 9, 1945, Hitler’s fascism was finally crushed amongst the rubble of Berlin and the “thousand-year Reich” came to a mercifully premature end.

The death blows were struck, overwhelmingly by the Red Army and the ghosts of 27 million Soviet citizens who it carried on their shoulders. In the words of Winston Churchill, the Red Army “tore the guts out of the Wehrmacht,” and he was indeed unstinting in his praise of the sacrifices made by the Soviet peoples in the victory we shall celebrate this week.

It should be acknowledged too that, but for Mr Churchill, the British ruling class would have surrendered to Hitler and the city of London queued up to sell him financial services. Elements of the British royal family itself would have thrown open the gates of Buckingham Palace.

The same ruling class which had appeased Hitler at every turn wished nothing more than that he would turn his monstrous war machine east instead of west, and destroy the USSR. The ruling class which refused Soviet efforts to form an anti-Nazi pact to stop fascism in its tracks before it got going. And which delayed the opening of the second front in the west until they could see the way the wind was blowing, and became more worried about how far the Red Army could go in their ultimately victorious onslaught against the beast of Hitlerism.

No Russian family, indeed no Soviet family, did not lose at least one relative in the inferno. But victory was won and the Soviet peoples’ army wrote their names in the stars and achieved immortality.

This week, the secretary of state of the United States, one part of the great victorious alliance, canceled a meeting with German Chancellor Angela Merkel. He did so because he had failed in advance to bully and browbeat her into acquiescence over the Nord Stream 2 gas pipeline, which will bind together the Russian and German peoples in a joint and mutually beneficial economic relationship and help guarantee that no such slaughter can ever again occur between them. While Pompeo is no Ribbentrop and Trump is no Hitler, the politics of diktat did not die in the bunker in Berlin in 1945.

The endless demands of the US government for economic warfare against Russia, China, Venezuela, Iran, Cuba, Uncle Tom Cobley and all are leading the great people of the US into ever-deeper division with their allies. Angela Merkel, whose own personal telephone was tapped by the oozingly liberal Barack Obama and who has been denied access to her own illicitly gathered NSA file, has clearly reached the end of her tether with Donald Trump.

The countries of the European Union which followed President Trump into the now patently obviously ludicrous schoolboy politics of diplomatic recognition of the fraudster Juan Guaido are both embarrassed and angry as his US-inspired coup d’etat has collapsed like a spoiled souffle.

His trade war with China, conducted with the now-usual bluff and bluster threats and hints and sanctions, is leading to a poisoning of the international investment climate.

Dispatching gunboats to the Persian Gulf, which if it was closed by hostilities would bring Western economies to their knees, is adding to a dystopian horror in the chanceries of Europe which fear that if the lights go out across Europe, they may not be lit again in our lifetime. The world is now a very dangerous place.

Only the abandonment of diktat, a return to the negotiating table, can bring equilibrium to the world situation. As Mr Churchill said: “Jaw-jaw is better than war-war.”

Donald Trump’s appearance at the Victory Parade this week may alas be out of the question.

However, he should watch it on TV, he likes TV, and ponder this. The allied defeat of Hitlerism was the greatest achievement of human history. The sundering of the forces which won the victory, the calumnizing of the leading force which secured the victory, the frantic efforts to achieve hegemony are futile, doomed as utterly as the idea of a “thousand-year Reich.” The world has turned.