Authored by Caitlin Johnstone via Medium.com,

In an interview with the Washington Post yesterday, House Speaker Nancy Pelosi announced that she opposed the impeachment of President Trump. This comes shortly before Mueller’s investigation into Trump-Russia collusion is expected to wrap up.

“This is news. I’m going to give you some news right now because I haven’t said this to any press person before. But since you asked, and I’ve been thinking about this: Impeachment is so divisive to the country that unless there’s something so compelling and overwhelming and bipartisan, I don’t think we should go down that path, because it divides the country. And he’s just not worth it.” 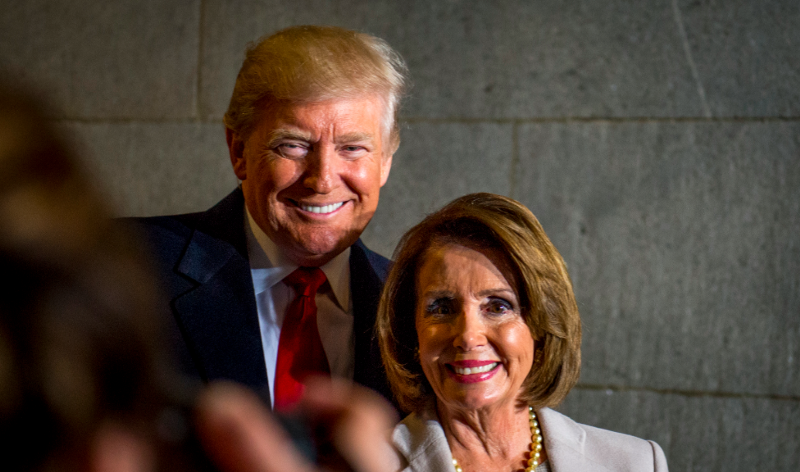 The response to Pelosi’s remarks has been swift and strong.

“Wrong!” exclaimed MSNBC’s Russiagate con man Malcolm Nance via Twitter. “What the hell is wrong with the @SpeakerPelosi Congress that they absolve themselves of their duty! Nothing is criminal anymore?! Trump can do and say like a dictator as he pleases? All of his crimes are OK even if you see them? This requires a public outcry. #Disgraceful”

“I like Speaker Pelosi but this is NOT the right approach,” tweeted Michael Avenatti of Stormy Daniels fame. “If Trump has committed impeachable offenses, he must be charged and he must face a trial in the Senate. Would the Repubs take this approach? Hell no! And this is why we get outplayed.”

“Sorry, Madam Speaker,” tweeted Esquire’s Charles P Pierce. “If you really believe the president* is an unprecedented threat to the Constitution, your oath demands that you begin the process to remove him. It’s your job.”

Wrong! What the hell is wrong with the @SpeakerPelosi Congress that they absolve themselves of their duty! Nothing is criminal anymore?! Trump can do and say like a dictator as he pleases? All of his crimes are OK even if you see them? This requires a public outcry. #Disgraceful. https://t.co/7m3lElzP5n

The House’s most virulent Russiagater, however, sang a different tune.

“If the evidence isn’t sufficient to win bipartisan support for this, putting the country through a failed impeachment isn’t a good idea,” said Congressman Adam Schiff told CNN yesterday.

As you might expect, those voices in alternative media who’ve been voicing skepticism of the Russiagate narrative since the beginning have been having a ball with this one.

“BREAKING: The Democrats’ Congressional leadership is realizing that their two-year Russia conspiracy theory is not going to pan out,” tweeted journalist Aaron Maté, who has been in my opinion the single most lucid Russiagate critic for a long time now.

“If Trump is literally controlled by Putin to the point where Trump is forced to act in the best interests of Russia *at the expense of the US*  –  which has been the prevailing claim not of Dem fringes but its mainstream  –  how can it be morally justified not to impeach him???” tweeted journalist Glenn Greenwald in response to Pelosi’s comments.

How indeed? Pelosi’s comments go completely against the narrative that mainstream Democrats have been selling America for over two years now, and this close to the Mueller report amount to a rejection of that narrative. Her statement is a tacit admission that she knows Russiagate is bullshit, has always been bullshit, and will continue to be bullshit.

Anyone who actually believed Putin controls Trump, Trump subordinates US interests to Russia, and that Trump conspired with a foreign adversary to win an election – as Schiff has spent 2 years screaming he’s seen *conclusive* evidence for – would have a duty to try to impeach: https://t.co/ihPBI3ZOBG

“Is it possible that Putin has something on Pelosi?” Greenwald joked.

“Or perhaps Democratic politicians and their media allies have been knowingly feeding the party base and cable viewers unadulterated, deranged, unhinged bullshit that they now can’t carry through on with the power in their hands because it was all self-serving, manipulative dreck? Anyone who has ever believed Trump is controlled and blackmailed by Putin to the point that Putin makes Trump treasonously sacrifice America’s interests for Russia’s — and there are a lot of you — should be marching in fury in the streets over Pelosi’s refusal to impeach Trump.”

But, of course, they will not. There will be no protest against Pelosi’s opposition to impeachment because those who would lead it know there will never be any evidence that could possibly lead to a bipartisan willingness in the Senate to remove him from office.

Anyone who’s paid close and intellectually honest attention to the Russiagate circus has known since the beginning that Trump was never going to be impeached for a treasonous conspiracy with the Russian government, despite the endless fantasies inflicted upon the blinkered Maddow muppets day after day after day for over two years now. Back in 2017 I said that “Mueller will continue finding evidence of corruption throughout his investigation, since corruption is to DC insiders as water is to fish, but he will not find evidence of collusion to win the 2016 election that will lead to Trump’s impeachment,” because it was obvious to anyone who knew anything. And that has proven to be the case with uninterrupted consistency.

If those who have been driving the Russiagate conspiracy theory really believed what they’ve been pushing, they would be up in arms at Pelosi’s remarks. Instead, we see responses like Russiagate grifter Bill Palmer publishing a hilarious article titled “Nancy Pelosi is playing rope-a-dope with Donald Trump on impeachment”, explaining that her remarks were actually a brilliant 57-D chess maneuver designed to “play this Trump fool like fiddle.”

“Instead, by answering the question in this manner, Pelosi accomplishes two things,” says the Palmer Report, where sitting US senators and top Harvard law professors go for the important updates they need to continue fueling Russia hysteria in America.

“First, she manages to put off the question until she and her allies have managed to carve Donald Trump up. Second, she’s messing with him. She just insulted him by saying he’s not worth the trouble of impeachment. Pelosi is looking to bait Trump into publicly feuding with her over the question of impeachment. That way it’ll be Trump introducing the concept, not her. And that’ll serve to help put the impeachment process on the right track. Just don’t call it ‘impeachment’ quite yet.”

So that tells you a bit about where the Russiagaters are at today.

This all comes out, by the way, at the same time as a new Wall Street Journalreport that Trump once attempted to personally cajole German Chancellor Angela Merkel into ceasing to buy gas from Russia out of fear that “it will make Europe’s largest economy excessively reliant on Russian energy.” Hardly the behavior you’d expect from a Putin puppet, but then neither are the rest of the many, many other actions that this administration has taken against the interests of Moscow.

As Democratic elites back off impeachment & collusion after pushing it for 2 years, perhaps voters will conclude they’ve been misled. And perhaps a backlash will benefit the wing of the party those same elites have used the Trump-Russia hype to ward off: the actual progressives.

It is right and appropriate that those few voices on the left who’ve been sharply critical of Russiagate from the beginning are now taking some time to gloat at and mock its peddlers with increasing scorn. The centrists who chose to spend more than two years forcing everyone’s energy into this blatant psyop which escalated a cold war against a nuclear superpower were wrong, and the leftists who objected to it were right. Trump’s term is more than halfway over, and Russiagaters chose to suck all the oxygen out of the room for this brainless, fruitless, worthless endeavor instead of allowing space for progressive reform and for criticism of Trump’s actual pernicious policies from the left. And they did it on purpose.

Mock the Russiagaters. Mock them ruthlessly, and never, ever let them forget the horrible thing that they did. Never stop making fun of them and reminding them how stupid and crazy they acted during this humiliating period of American history. And never stop using it as a weapon against them. They were wrong, so they should not be leading the way on what passes for America’s political left today. Skepticism was the only appropriate response to Russiagate in a post-Iraq invasion world, and those on the left who made that appropriate response should be treated with infinitely more respect and deference than those who did not.

They were wrong, we were right, and now even Nancy Pelosi is all but admitting it. Never let them forget it.

Thanks for reading! My articles are entirely reader-supported, so if you enjoyed this piece please consider sharing it around, liking me on Facebook, following my antics on Twitter, throwing some money into my hat on Patreon or Paypal, purchasing some of my sweet merchandise, buying my new book Rogue Nation: Psychonautical Adventures With Caitlin Johnstone, or my previous book Woke: A Field Guide for Utopia Preppers. The best way to get around the internet censors and make sure you see the stuff I publish is to subscribe to the mailing list for my website, which will get you an email notification for everything I publish.