A senior Google director of US public policy defended the company’s ongoing sponsorship of the Conservative Political Action Conference (CPAC) in leaked audio of what is believed to be a company-wide internal meeting, according to Breitbart‘s Allum Bokhari (who in September published a leaked recording of Google execs panicking over Hillary Clinton’s election defeat). 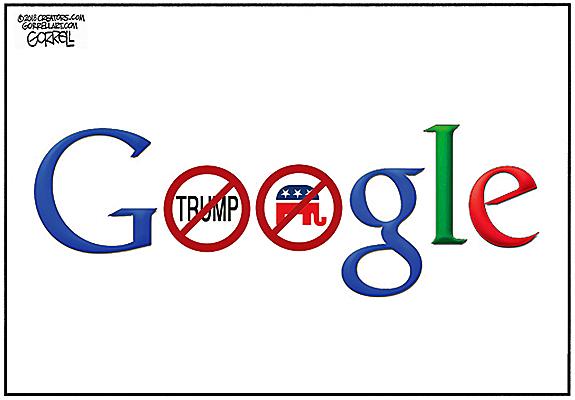 According to the report, Google senior director of US public policy, Adam Kovacevich, tells employees that the company “should be involved” with CPAC because a majority of company employees “would want to steer conservatives and Republicans more towards a message of liberty and freedom and away from the more sort of nationalistic incendiary comments, nativist comments and things like that.”

The comments came to light in leaked audio files allegedly of a company-wide meeting at Google, part of which is now exclusively reported by Breitbart News. Another part of the transcript was released last Friday on Tucker Carlson Tonight, while further snippets revealing Google’s funding of establishment conservative think-tanks were published by the left-leaning tech magazine Wired in December.

The alleged meeting took place in the wake of Google’s sponsorship of CPAC in 2018, which triggered an internal rebellion from left-wing employees of the tech giant. Breitbart News exclusively reported on the revolt at the time, in which radical left-wingers  inside Google accused CPAC of “ethno-nationalism” and “hate.” –Breitbart

In his attempt to justify the company’s CPAC involvement, Kovacevich suggested that the conference has a “dual identity” – one being a “premier gathering” of a “whole swath of conservatives” which include “national security conservatives, economic conservatives, libertarians, the Log Cabin Republicans, deficit hawks, small government advocates.”

The other side of CPAC is a “sideshow circus-like element” in which outrageous figures are invited to say “incendiary and offensive things, I think in order to draw more attention and controversy to the conference.”

“I want to be clear that we don’t agree with those things, right?” Kovacevich insisted. “We abhor and rebuke the offensive things that are said at the conference. Those things obviously don’t align with Google’s values and our approach.”

“And I think it’s challenging for us to reconcile those two identities of CPAC.”

In short – Google wants its very liberal employees to calm down over the company’s involvement in CPAC, because while it may be full of nationalists, Google can give love a fighting chance – or something like that.

In another segment of the audio clip, Kovacevich explains that it’s important to reach out to conservatives in order to counter conservative media outlets, including Breitbart News, Fox News and the Daily Caller – as Google has been receiving “growing negative attention from the conservative media which is influential among those same Republicans who control government,” and “pushing the storyline that Google is biased against conservatives.”

Full transcript below along with commentary from Breitbart‘s Bokhari.

Yeah, it’s a great question Greg. I appreciate the question. I think one of the big themes – I think picking up on your question – that I saw in some internal listservs and one of the Dory questions focused on the question of the other speakers, right? What are we saying in terms of sponsoring a conference where you have sort of incendiary speakers, right, and I think it’s a very valid question, one we’ve talked a lot about here. I think, to be candida, one of the challenges we face with CPAC is that the conference itself has a kind of a dual identity. So on the one hand, it’s really the premier gathering of sort of big-tent conservatives. Especially in non-presidential years it sort of in some ways takes the place of the annual Republican National Convention. You have a whole swath of conservatives: national security conservatives, economic conservatives, libertarians, the Log Cabin Republicans, deficit hawks, small government advocates who attend the conference. The conference is attended by about 10,000 people. And so one of the other things is that the Republican Party and I think conservatism, in general, is also going through a lot of internal debates about what it should be, right, what should be sort of the position of the party. And I think that’s one that we should be involved in because we, I think, want probably — the majority of Googlers would want to steer conservatives and Republicans more towards a message of liberty and freedom and away from the more sort of nationalistic incendiary comments, nativist comments and things like that. But it has been a very valuable place for us to reach a lot of the people and the big tent of conservatism.

On the other hand, and sort of to get to the point of the dual identity, in recent years with CPAC there has also been this kind of sideshow circus-like element, right, that I think the CPAC organizers have intentionally cultivated sometimes, inviting outrageous figures that say incendiary and offensive things, I think in order to draw more attention and controversy to the conference. I want to be clear that we don’t agree with those things, right? We abhor and rebuke the offensive things that are said at the conference. Those things obviously don’t align with Google’s values and our approach. And I think that it’s challenging for us to reconcile those two identities of CPAC. I think one of the things that — we also face this question in other areas, by the way. So in the realm of sort of politics, there’s always going to — there’s often going to be someone at some event we sponsor who will say something we don’t agree with. Last year, a group that we support, the New America Foundation, had your guys’s, one of your Senators, Elizabeth Warren. She spoke, and she called for the breakup of Google at that [laughter] conference, right? The conference of an organization we support. Obviously we don’t support that position.

One of the other things we’re dealing with is also growing negative attention from the conservative media which is influential among those same Republicans who control government. We have sites like Breitbart and Daily Caller and Fox News who have been focusing on some of the tensions that we Googlers feel internally around — many of which became public after the Damore memo. And I think some of those media outlets are actively pushing the storyline that Google is biased against conservatives. And of course we aim to build products for everyone but if that notion becomes accepted among conservative and Republican policymakers, that could be harmful to our mission of building products for everyone. So one of the things we say out on our team is, in order to count on an ally in the political realm you have to make an ally. If we want policymakers to help us when we have a bad bill or a regulation pending, we have to build relationships with them ahead of time. I think part of our work in the DC office and across all of our team is building relationships not just with the people in power but also with the people who influence them.

In a followup question, Kovacevich also acknowledged the “pain” and “disappointment” of Google employees who were up in arms at the tech giant’s sponsorship of CPAC in 2018. He went on to openly disparage sites like Breitbart and the Daily Caller as outlets that might be “perpetually” at odds with Google, and state “blatant mistruths.”

Questioner: Okay. Second question is– you mentioned Breitbart and The Daily Caller a couple of times before in the talk. Are we orienting our public image so that we will receive less negative and maybe more positive press from sites like Breitbart and Daily Caller?

Kovacevich: I think it’s a complicated question. I mean, I think at a certain point our values are our values, right? Google stands for inclusiveness, we stand for tolerance, we stand for building products for everyone, and if certain outlets don’t like that, we are probably going to be at odds with them perpetually, right? On the other hand, sometimes some outlets and others just state blatant kind of mistruths, right, or they’ll shade something in sort of the most– you know, that has a legitimate explanation, they’ll shade something in sort of the most negative light possible, and that’s something that we try to avoid, if we can, consistent with our values. I think– and I want to probably wrap up because we’re almost at the hour– look, I appreciate that this is hard and I know that our sponsorship of this has caused pain, disappointment to many of you and we understand that, and I think appreciate those of you who have spoken up about that. I value that Google is the kind of company where people can voice their disappointment and their hopes for how the company can stay true to its ideals going forward in the future. We certainly didn’t mean to cause pain or that kind of disappointment in people. And we really do value the feedback and the input.