I have certain rules I live by. My first rule: I don’t believe anything the government tells me. Nothing. Zero.

Let me tell you, you take on the intelligence community and they have six ways from Sunday at getting back at you.

– Senate Majority Leader Chuck Schumer in a 2017 interview on MSNBC

As someone whose website was slandered by the earliest manifestations of the hysterical Russiagate mob, I could go on and on now that’s the whole spectacle’s been disproven, but I’m not going to do that. Rather, I want to highlight how despite the whole thing blowing up, we’ll be living with severe direct consequences for years to come. 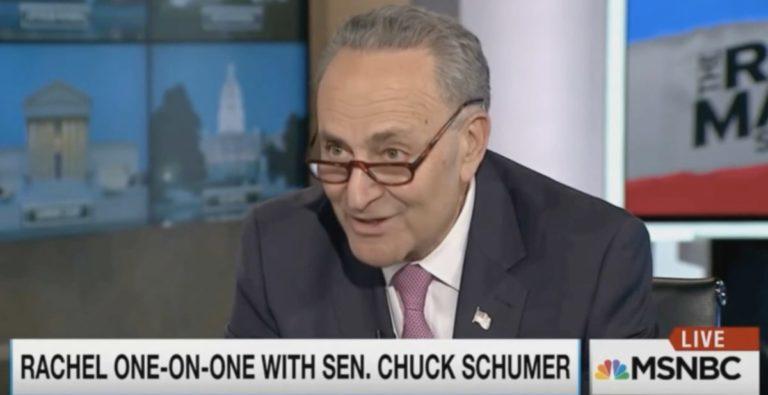 First, it’s important to point out that none of Russiagate’s most irresponsible grifters will face any serious repercussions for wasting the country’s time, money and energy on a fake story for the past two years. Russiagate was as much a business model as it was a conspiracy theory, and some of it’s most shameless peddlers made out like bandits over the past couple of years.

Rachel Maddow makes *$10 million a year.* Every month, more money is put into her bank account by a major corporation than most people make in a lifetime, literally. She went on the air for 2 straight years & fed millions of people conspiratorial garbage & benefited greatly. pic.twitter.com/4PhOrZRR1D

All MSNBC hosts have millions upon millions in their bank accounts. It will buy massive third homes and boats, but it won’t erase the role they played in going on TV every day and manipulating people’s fears and disseminating a fake conspiracy theory that rewarded them greatly.

Let’s not forget Luke Harding, a guy who literally wrote a book titled “Collusion,” which naturally soared to the top of the New York Times bestseller list.

That this is @lukeharding1968‘s pinned tweet is the perfect encapsulation of Russiagate: its media “experts” deceitfully peddled a conspiracy theory that did untold damage to their industry & the world, but they benefited financially. See our interview: https://t.co/AVUQ7HF5Aa https://t.co/wnxadIFsyn

Of course, nothing seriously damaging will happen to Rachel, Luke or the other myriad Russiagate charlatans who drove and profited handsomely from what was by far the biggest conspiracy theory of the past two years. Will they be banned from Facebook, Twitter or YouTube? Of course not, despite the fact that they played a larger role than anybody else with respect to driving our national conversation into a cesspool of insanity, xenophobia and falsehoods.

Nevertheless, you can be sure Tim Cook, Sundar Pichai and Mark Zuckerberg will never come out and condemn them for peddling endless amounts fake news. No tech giant scarlet letter will be forthcoming for the priests and priestesses of Russiagate; but why not?

The simple answer is that all the public concern about “fake news” was just a ruse — the tech giants were just pretending to care about it. The real objective was to appease angry politicians by finding an excuse to erase and de-rank opinions that don’t conform to the dispositions and leanings that dominate the executive suites of the largest tech companies and the power players in establishment Washington D.C.

Incredibly enough, the entire push that convinced much of the public of a pressing need to encourage tech giants to aggressively censor and ban certain opinions was driven by Russiagate in the first place. In other words, hysteria and fear that Russian propaganda would infect the minds of the American public was a primary driver in getting much of our culture to accept flippant de-platforming from tech giants across the platforms that have come to dominate online conversation in this country. Russiagate is now over, but tech giant censorship remains. We’ve been scammed in far more serious and long-lasting ways than meets the eye.

Read the tweet below and think about what’s been done.
Trump is now cleared, but tech giants will continue to censor, and this impetus was put into motion in the first place by RussiaGaters.
So a completely false narrative led to censorship that will not be going away. https://t.co/ifHYCIAfD9

Now would be a good time to revisit a few excerpts from last year’s piece, These Are the Times Bitcoin Was Made For:

Donald Trump’s election and Bernie Sanders’ unexpectedly strong run in a rigged Democratic primary really shook the neoliberal/neocon establishment to its core. The status quo response has been as pathetic as it’s been extraordinary, with the hysteria so completely off the wall I sometimes wonder if the whole Russia-Trump collusion narrative was invented and propagated for the sole purpose of promoting a cultural acceptance of censorship.

There are two crucial attack vectors being targeted when it comes to punishing the transgressions of American thought criminals; money and communications, and we need to understand that Alex Jones is our cultural guinea pig. The tech giants started by kneecapping his voice by simultaneously de-platforming his presence from many of today’s dominant communications platforms. Now PayPal’s moved in to make payments more difficult, thus threatening his ability to earn money. You don’t have to like anything Alex Jones does to see how dangerous this is. What’s being done to him can and will be to done to others deemed undesirable by Silicon Valley oligarchs should they get popular enough. What’s emerging is a playbook on how to exert pressure and encourage self-censorship in the digital age and you better pay attention.

Let’s take another step back to take stock of where we’re at. Sure a bunch of scam-artist pundits and fake journalists were momentarily embarrassed, but these people have no shame and many of them already achieved fame and fortune. Moreover, just like the banker crooks of the financial crisis era and the Iraq war WMD peddlers that came before them, these people are more likely to be promoted than face any life-altering consequences for the society damaging lies they spread. In fact, our system is so completely rigged in favor of certain kinds of opinions, not even the most bald faced liars amongst them will even see their social media accounts shuttered.

So yes, Russiagate has blown up spectacularly, but we’re still left with selective tech giant censorship which focuses on a certain type of “conspiracy theory” or fake news. What Facebook, Apple, Google and others have made clear at this point is that fake news is fine as long as it’s repeating lies of the government or intelligence agencies. There’s no amount of war-creating government inspired fake news someone can spread that will ever get you banned by the tech giants, but if you dare to have a discussion about vaccines, 9/11 or flat-earth, you’ll never be heard from again.

Russiagate ending doesn’t alter this entrenched and very dangerous double standard. We’re once again left with a monumental falsehood exposed, yet the damage has already been done to public discourse and the ability to freely communicate on America’s dominant tech platforms. As such, we’ll continue to be led apathetically in a very restrictive and unfree direction unless we wake up and make some serious changes.

Yes, a ridiculous, false and deranged conspiracy theory has been disproven, but the damage has already been done — and the damage is severe.

Liberty Blitzkrieg is now 100% ad free. As such, there’s no monetization for this site other than reader support. To make this a successful, sustainable thing I ask you to consider the following options.

You can become a Patron.

You can visit the Support Page to donate via PayPal, Bitcoin or send cash/check in the mail.