No Federal Reserve Chairman under its current configuration can say QE didn’t work. Those words will never pass the lips of whoever it may be occupying that position. The world’s bond markets, however, are trying very hard to make this resistance as uncomfortable as possible.

The one thing central bankers here along with everywhere else LSAP’s were unleashed could try to claim was yields. And by those I mean something Economists call term premiums. Those trying to argue in favor of these programs as stimulus have to deconstruct yields into discrete parts. Why? Because interest rates have fallen far, far more without QE than with it.

This result at first seems backwards – when thinking about everything from the perspective of central banks being central.

Therefore, central bankers and Economists struggle to make their case, starting with the fact they’ve tried to argue this whole time how low bond yields are, first, stimulus, and, second, due to these bond buying programs.

On the surface, it sounds like that’s how it should be. A central bank is a huge prospective pool, and if it suddenly starts buying tens of billions per month, why shouldn’t rates fall? With this added “demand”, bond prices seem like they would end up so much higher than otherwise.

Experience, however, shows it is uniformly the other way around. And not just here or there, or in one instance or two, but everywhere all over. Quantitative easing has been the most experimentally-established monetary program in history – and I’m not even factoring Japan here. It has been conclusively, inarguably proved to have been an utter failure.

Because of this, earlier this week while Chairman Powell was in Chicago for what was an international disgrace talking about rate cuts, he otherwise had no choice but to say:

“…views differ on the effectiveness of these policies.”

They really don’t. Economists have tried to claim how as yields have declined more without QE than with it, that’s only because of these term premium components. 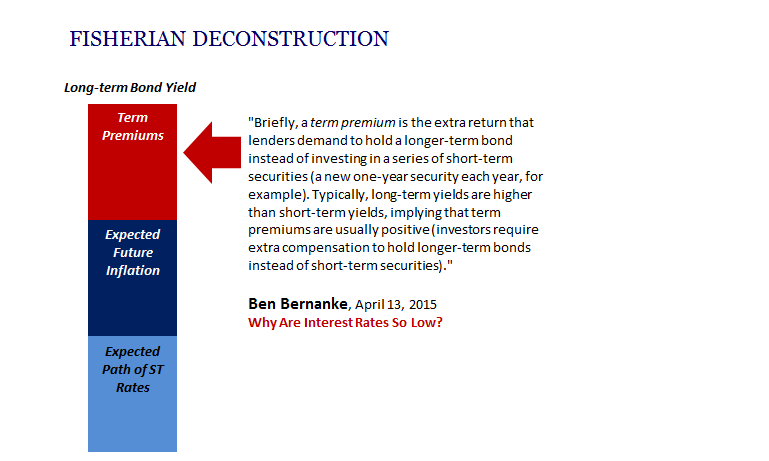 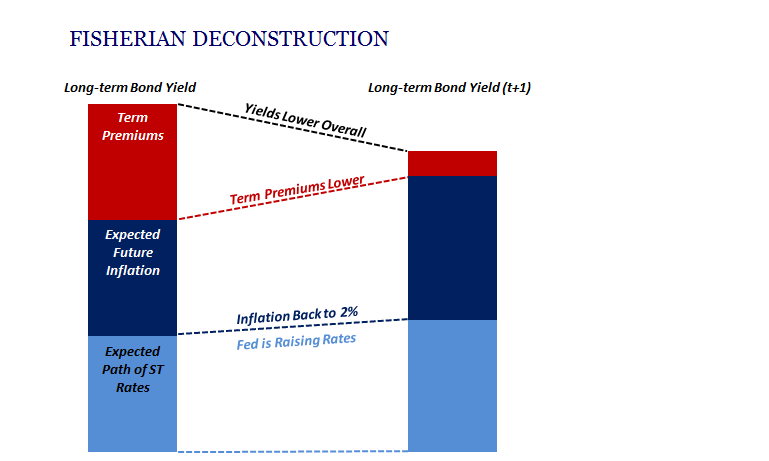 If central bank bond buying works, over the intermediate term bond yields should rise to reflect higher market expectations for inflation and the path of short-term rates (the blue parts). That’s what recovery is, an inflationary breakout and economic acceleration.

But if bond yields are actually declining, as shown immediately above, then central bankers have to rationalize a different scenario using nothing more than a fudge factor. They have to say that though yields are falling it’s not because the market disagrees on recovery and inflation (the blue components still rising) it must be because term premiums within them are – which is actually a good thing!

If any of that were true. 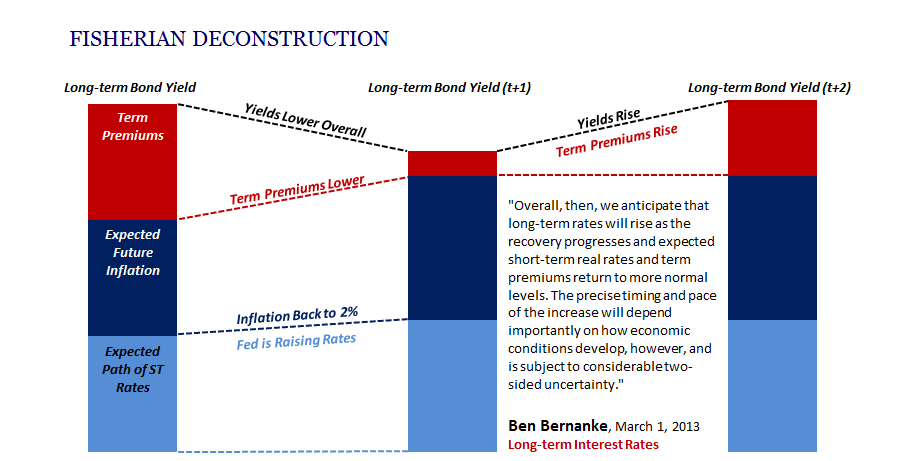 As it is, Economists clinging hard to this view have had to admit the way rates are going it makes their term premiums more and more negative. Yes, negative. To keep claiming that short-term rate expectations and inflation projections in the markets are consistent with what central bankers are seeing, term premiums are not just way below zero now they’ve somehow been negative for years.

The lower bond yields go in direct opposition to this lunatic, irrational denial the more obvious it is that these people are either purposefully disingenuous (ideologically committed to experimentally invalidated assumptions) or flat out liars. If you have to so torture your own conceptions (term premiums are actually just a made up thing for Economists to try and mathematically describe their nemesis, the things they just don’t understand, bonds) this much to try to make at best squishy claims about QE, something that was supposed to be a slam dunk policy, you’ve lost. 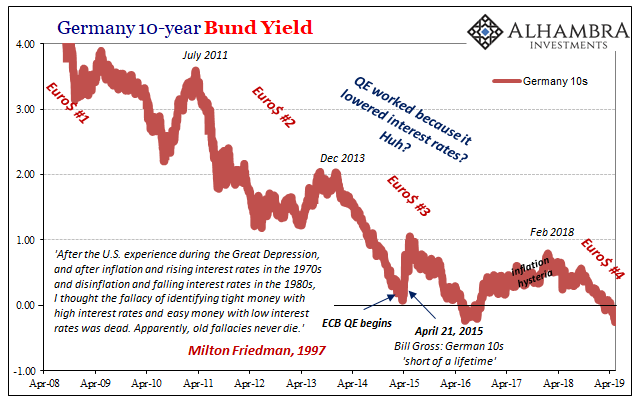 Nowhere is this perhaps more obvious than Europe. Even when the Continent’s cumulative economy was supposed to have been booming, all the ECB could extract was what you see above.

Accordingly, German bund yields (10s) hit a new record low today. The ECB stopped outright buying many months ago, proving once again that yields are not in any way related to that bond buying. Surpassing 2016, at -26 bps everyone always asks who it is that is purchasing these things with a guaranteed loss of money built into them, and why.

It is the banking system which does, and those banks don’t see these securities as investments. They are balance sheet tools, nothing more; ballast for complex balance sheets put together featuring inherently complex risks. Paramount among them is the modern funding or the monetary environment. Liquidity risk. 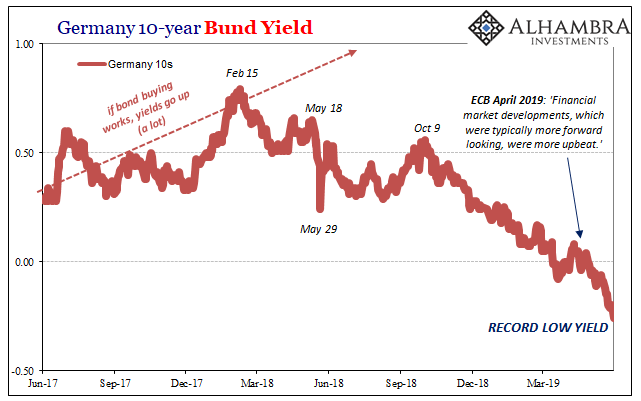 These financial markets continue to show that this is the correct view. This is not trade wars; it is the inevitable consequences of Mario Draghi and his like trying to decipher term premiums in a way that don’t outright refute his models and unequivocally establish his monetary incompetence.

And the European economy is following suit – with the bond market. The latest data out of Germany, numbers which along with today’s jobs report in the US have propelled federal 10s to this new record low, continues to be awful.

The ECB like the Fed forecast green shoots leading to a second half rebound. Bond yields on the other hand are saying we aren’t even close to the end yet. The data? 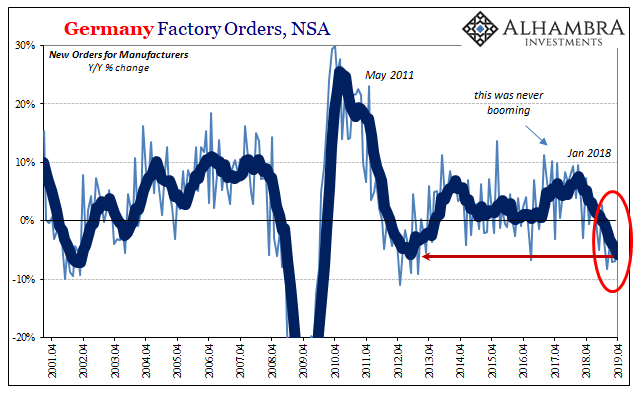 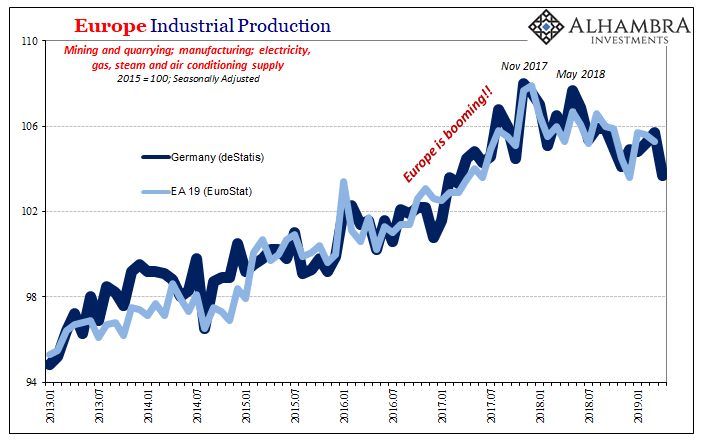 It aligns perfectly with market events/breaks. Industrial production has been falling for over a year (again, not trade wars) especially after last May, while factory orders, a measure which would show things turning around if that was happening, are falling at an average rate equal to the worst point during the 2012 re-recession.

And it’s just getting started. Unless, of course, term premiums really are hugely negative within all these tumbling bond yields. If that is indeed the case, this is the most confoundingly backwards recovery ever dreamed up.