The Federal Reserve’s Federal Open Market Committee on Wednesday voted unanimously to keep the federal funds rate unchanged. Overall, the FOMC signaled it has made a dovish turn away from the promised normalization of monetary policy which the Fed has promised will be implemented “some day” for a decade. Although the Fed began to slowly raise rates in late 2016 — after nearly a decade of near-zero rates — the target rate never returned to even three percent, and thus remains well below what would have been a more normal rate of the sort seen prior to the 2008 financial crisis.

Much of the Fed’s continued reluctance to upset the easy-money apple cart comes from growing concerns over the strength of the economy. Although job growth numbers have been high in recent years — and this has been assumed to be proof of a robust economy — other indicators point toward less strength. Workforce participation numbers, wage growth, net worth numbers, auto-loan delinquencies and other indicators suggest many Americans are in a more precarious position than headlines might suggest. 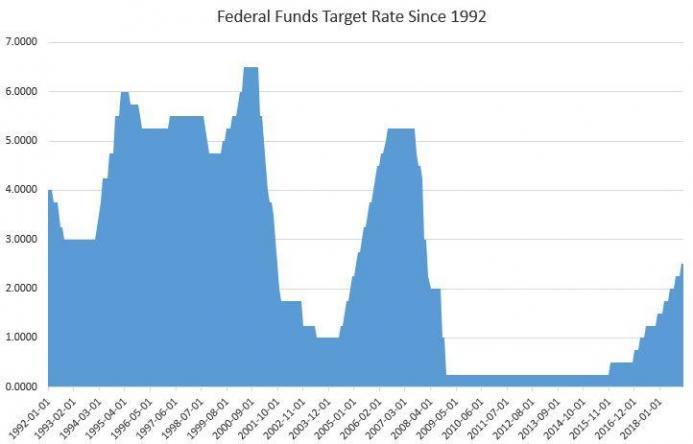 The Fed’s refusal to follow through on raising rates, however, has highlighted this economic weakness, and today’s front-page headline in the Wall Street Journal reads: “Growth Fears to Keep Fed on Hold”

For similar reasons, the Fed has also signaled it won’t be doing much about it’s enormous balance sheet which ballooned to over four trillion dollars in the wake of the financial crisis. Faced with enormous amounts of unwanted assets such as mortgage-backed securities, the Fed began buying up these assets both to prop up — and bail out — banks and to produce an artificially high price for debt of all sort.

This kept market interest rates low while increasing asset inflation — all of which is great for both Wall Street and for the US government which pays hundreds of billions in interest on federal debt.

At best, “total balance sheet will be around $3.8 trillion, down from $4.5 trillion at its peak.” Moreover, “the Fed will soon be a net buyer of Treasurys once again,” analysts said, and some estimate “the Fed is on course to be buying $200 billion of net new Treasurys by the second half of 2020.”

Put simply: the days of quantitative easing are back, and we’re not even in a recession yet.

Some observers might simply respond with “big deal, the economy’s growing, and better yet, the Fed has given us both growth and little inflation.”

But things are not all as pleasant as they seem.

First of all, even by the Fed’s own measures, inflation isn’t as subdued as the headline “core inflation” or CPI measure suggests. According to the Fed’s “Underlying Inflation Gauge” which takes a broader view beyond the small basket of consumer goods used for the CPI, inflation growth over the past year has returned to the elevated levels found back in 2005 and 2006.

This hasn’t been great for consumers, and it’s been especially problematic when coupled with ultra-low interest rates. The low interest rates are a problem because people of ordinary means — i.e., the non-wealthy — don’t have the ability to access the high yield investments that wealthier investors do.

Earlier this week, finance researcher Karen Petrou explained the problem that comes from ultra-low rates which lead to yield-chasing for the wealthy:

When interest rates are ultra-low, wealthy households with asset managers acting on their behalf can play the stock market to beat zero or even negative returns. We’ve shown in several recent blog posts how wide the wealth inequality gap is and how disparate wealth sources help to make it so. However, even where low-and-moderate income households can get into the market, their investment advisers should not and often cannot chase yields. As a result, ultra-low rates mean negligible or even negative return.

Thus, ordinary people are faced with rising asset prices — driven in part by the Fed’s balance sheet purchases — while also finding themselves unable to save in way that keeps up with inflation.

Meanwhile, the wealthy reap the most benefits from Fed policy as they’re able to more effectively engage in yield-chasing.

Ordinary people get the short end of the stick from Fed policy in other ways. Petrou continues:

Historically, pension funds and insurance companies have invested only in the safest assets. These are now in scarce supply due in large part to QE andcomparable programs by central banks around the world . Pension plans and life-insurance companies increasingly have two terrible choices: to play it safe and become increasingly unable to honor benefit obligations or to make big bets and hope for the best. Under-funded pension plans are so great a concern in the U.S. that the agency established to protect pensioners from this risk, the Pension Benefit Guaranty Corporation, faces its own financial challenges . Yield-chasing life insurers are also a prime source of potential systemic risk.

Middle class people who have been told for decades to rely on pensions are now imperiled by Fed policy as well.

Not surprisingly, this has led to rising income inequality. While some free-market advocates tend to dismiss inequality as an unimportant metric, this is not a good approach when we’re talking about public policy. Fed policy — and resulting inequality — does not reflect natural trends arising from market transactions. Monetary policy is something imposed on markets by policymakers. And that’s what’s going on when we witness rising inequality due to the Fed’s monetary policy.

This has been going on since the late 1980s when Alan Greenspan relentlessly opened the easy-money spigot to spur economic growth throughout the 1990s. But, there were problems that resulted, as noted by Daniell DiMartino-Booth:

[A]t the National Association for Business Economics recent annual conference, University of California-Berkeley economics professor Gabriel Zucman presented his findings on the widening divide between the “haves” and “have nots” in the U.S. His conclusion: “Both surveys and tax data show that wealth inequality has increased dramatically since the 1980s, with a top 1 percent wealth share around 40 percent in 2016 vs. 25 – 30 percent in the 1980s.” Zucman also noted that increased wealth concentration has become a global phenomenon, albeit one that is trickier to monitor given the globalization and increased opacity of the financial system.

But experience suggests this hasn’t been the case. Part of the problem is that banking regulations handed down by the Fed and other federal regulators make loaning to smaller enterprises and lower-income households less attractive. Writes Petrou:

But, wasn’t there a burst of lower-rate mortgage refinancings that allowed households to reduce their debt burden and thus accumulate wealth? Did low rates allow higher-risk households at least to reduce their mortgage debt through refinancings? Again, low-and-moderate income households were left behind. They continued to seek refis after the financial crisis ebbed, but subprime borrowers current on their loans regardless of loan-to-value (LTV) ratios were less likely than prime or super-prime borrowers to receive refi loans even though higher-scored borrowers may or may not have been current and lower rates enhance repayment potential.

The overall effect suggests the accelerating reliance on quantitative easing and near-zero interest rates has been great for some Wall Street hedge fund managers — but for those at the low end of the lending and saving apparatus, things are even more constraining than ever. It’s hard to get a loan, and it’s also hard to save.

But at least the aggregate numbers are great, right?

Well, the Fed can’t brag about even that. A policy that favors billionaires might work on paper, of course, so long as the aggregate numbers point toward sizable growth. But even those numbers are so iffy as to prompt growth fears at the FOMC, and to ensure that the Fed puts an end to its promises to return policy to something that might be called normal.

As it is, it looks like we should expect a continuation of the policies which have coincided with both an unimpressive economy and rising inequality.

If that’s not evidence of the Fed’s failure, it’s hard to imagine what is.