Authored by Matthew Ehret via The Strategic Culture Foundation,

Speaking at China’s second Belt and Road conference in Beijing featuring 37 heads of state, Russia President Vladimir Putin unveiled the intention to unite Russia’s Northern Sea Route with China’s Maritime Silk Road. This announcement should come as no surprise to anyone who has been paying attention to the close strategic friendship between both countries since the 2015 announcement of an alliance between the Russian-led Eurasian Economic Union and Belt and Road Initiative. This extension of the Maritime Silk Road represents a powerful force to transform the last unexplored frontier on the Earth, converting the Arctic from a geopolitical zone of conflict towards a new paradigm of mutual cooperation and development. 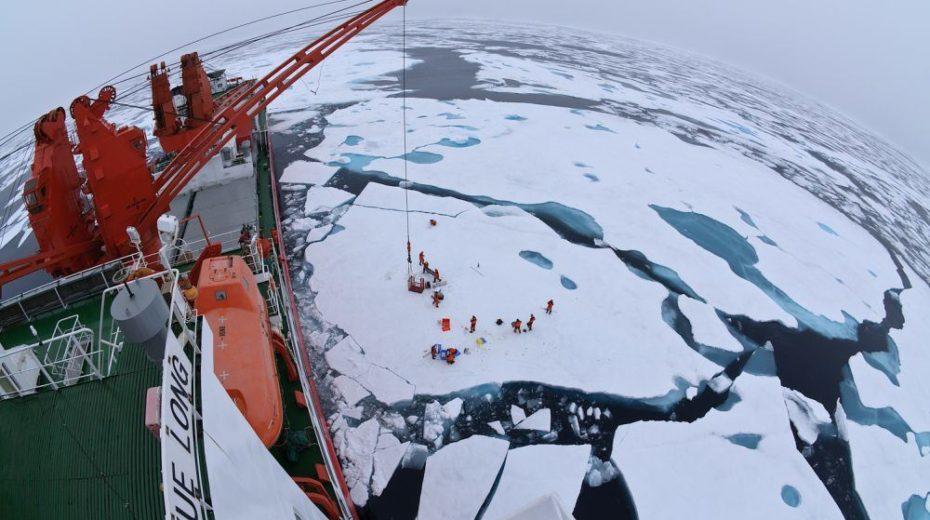 Putin gave a speech at the BRI forum on April 26 stating:

“the Great Eurasian Partnership and Belt and Road concepts are both rooted in the principles and values that everyone understands: the natural aspiration of nations to live in peace and harmony, benefit from free access to the latest scientific achievements and innovative development, while preserving their culture and unique spiritual identity. In other words, we are united by our strategic, long-term interests.”

Weeks before this speech Russia unveiled a bold plan for Arctic development during the conference Arctic: Territory of Dialogue on April 9-10. This bold plan ties to the “Great Eurasian Partnership”, not only extending roads, rail and new cities into the Far East, but also extending science and civilization into a terrain long thought totally inhospitable. At this Arctic conference, China and Russia signed the first scientific cooperation agreement together setting up the “China-Russia Arctic Research Center” as a part of the Polar Silk Road.

The BRI’s Success So Far

The Belt and Road Initiative has already won over much of Africa as BRI-connected rail, ports, and other infrastructure are providing a breath of fresh air to nations long held hostage by IMF/World Bank conditionalities. Pakistan and much of Southwest Asia are also increasingly on board the BRI through the growing China-Pakistan Economic Corridor. Seventeen Arab states consolidated 8 massive BRI infrastructure projects between April 15-16 and much of Latin America has also joined with hundreds of billions of dollars of infrastructure projects. Italy embraced this new BRI framework on March 23, and Greece joined the Central and Eastern European nations of the 16+1 alliance on April 9th. The Eurasian Economic Union is now in the final stages of a long planned economic treaty between China and the Russian-led economic block. Although America has been invited to the BRI on many occasions since its 2013 inception, no positive response has been permitted by the NATO-Deep State power structures manipulating the west.

While China’s activity in the Arctic is only manifesting now, its Arctic Strategy began many years ago.

The importance of the Arctic Silk Road for China

China deployed their first Arctic research expedition in 1999, followed by the establishment of their first Arctic research station in Svalbard, Norway in 2004. After years of effort, China achieved a permanent observer seat at the Arctic Council in 2011, and began building icebreakers soon thereafter surpassing Canada and nearly surpassing the USA whose two out-dated ice breakers have passed their shelf life by many years.

As the Arctic ice caps continue to recede, the Northern Sea Route has become a major focus for China. The fact that shipping time from China’s Port of Dalian to Rotterdam would be cut by 10 days makes this alternative very attractive. Ships sailing from China to Europe must currently follow a transit through the congested Strait of Malacca and the Suez Canal which is 5000 nautical miles longer than the northern route. The opening up of Arctic resources vital for China’s long term outlook is also a major driver in this initiative.

In preparation for resource development, China and Russia created a Russian Chinese Polar Engineering and Research Center in 2016 to develop capabilities for northern development such as building on permafrost, creating ice resistant platforms, and more durable icebreakers. New technologies needed for enhanced ports, and transportation in the frigid cold was also a focus. China additionally has a 30% stake in the Yamal LNG Project and the ‘Power of Siberia’ 3000 mile pipeline to China is 99% complete and will soon be the primary supplier of China’s oil and natural gas needs.

Where the Belt Goes, the Road Follows

While the Belt and Road features two components (land and sea), the fact is that they are inextricably connected. Rails, ports and other civilization-building practices driven by a belief in scientific and technological progress have given this design a power and flexibility to adapt to every nation’s chosen developmental pathways. This is the mysterious “secret ingredient” to the BRI’s powerful adaptability which boggles the minds of closed-minded geopoliticians who can only think in zero-sum terms.

Scientific and technological progress, when shaped by the intention to uphold the common good represent UNIVERSAL requirements for human survival and satisfy a creative yearning at the deepest core of all people. Without this commitment to the continual improvement of productive powers of society and quality of life, a society will always be divided by the localized self interest of its parts fighting for their own short term benefits. Such has been the fate of the west as it embarked upon a consumer society driven by a “post-industrial mode of existence”after the assassinations of the 1960s and floating of the US dollar in 1971.

This concept of the common development of mankind both as a whole and in all of its parts was echoed recently by Xi Jinping who stated:

“China is ready to jointly promote the Belt and Road Initiative with international partners. We hope to create new drivers to power common development through this new platform of international cooperation; and we hope to turn it into a road of peace, prosperity, openness, green development and innovation and a road that brings together different civilizations.”

The BRI summit closed on April 27 with 37 Heads of State, and over 5000 leading participants from the public and private sector. Billions of dollars in BRI contracts were signed and the ideas that will carry humanity into the coming decades were displayed brilliantly. The future orientation of the BRI and the Russia-China alliance doesn’t stop with Earth based development, but extends also towards space exploration and colonization of other planetary bodies such as the Moon and Mars development programs to which both China and Russia have committed to in recent months.

The cage of delusions holding the Trans-Atlantic system together is cracking ever faster by the day with Trump’s continued fight against the British-run Deep State producing surprises such as the US-China collaboration during China’s historic landing on the far side of the moon on January 3, and his recent appeals for China-US-Russian cooperation. Following Italy’s lead, patriotic forces in Switzerland and Luxembourg signed MOUs with China’s Belt and Road creating a precedent for more Trans-Atlantic nations to jump on board the new emerging paradigm.