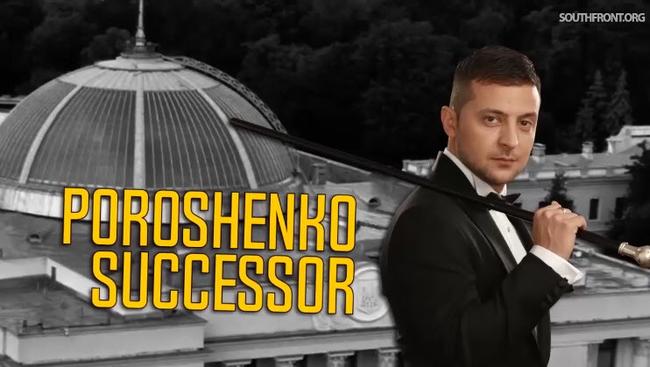 The parallels between the successor to Poroshenko and the current occupant of the White House are striking. Neither has had significant prior experience with national politics prior to launching a bid for the supreme executive office of their respective countries. Giving credit for Trump, he has had extensive experience in managing large businesses, Zelenskiy has none.

Both evaded compulsory military service citing health issues. Each owes his political success to their country’s population being worn down by a costly, endless war, and many-sided economic problems compounded by growing corruption and crony capitalism.

Both received support from major Jewish economic players with close ties to Israel (Igor Kolomoysky in Ukraine, Sheldon Adelson in the United States), with Trump subsequently repaying that debt of gratitude by transferring the US embassy to Jerusalem, designating it as the capital of Israel, and recognizing the annexation of the Golan Heights.

Both follow presidents who came into office as presumptive saviors of their countries, namely “Hope and Change” Barack Obama who delivered 8 years of a gradual deterioration in living standards, and “Revolution of Dignity” Petro Poroshenko who promised to transform Ukraine into a country comparable to the advanced capitalist states of Western Europe. And, last but not least, each represents a pile of political “mystery meat”. Not having a career in politics also means not having a pool of loyal and capable cadres who can descend on the government and govern in the name of their boss. This problem was clearly evident in Trump’s case. Lacking political cadres of his own, he was unable to staff the large number of positions vacated by Obama’s political appointees and instead had to rely on the suggestions of his vice president who was a consummate party insider. Worse, when Trump attempted to staff his foreign policy team with individuals advocating a less confrontational approach to Russia, such as Rex Tillerson and Mike Flynn, he found himself faced with extreme opposition from entrenched “deep state” bureaucrats. As we know, that resistance culminated in the Mueller investigation the ostensible goal of which was to investigate Russian “meddling” and Trump’s “collusion” therewith, but whose actual goal appears to have been to steer Trump’s foreign policy into greater confrontation with Russia, Iran, Syria, Venezuela and even North Korea. Now that US foreign policy is run by the likes of John Bolton (National Security Council), Mike Pompeo (State), and “Bloody Gina” Haspel (CIA)  valiantly assisted by Military Industrial Complex friend Patrick Shanahan (Defense), Robert Mueller can confidently announce “mission accomplished” and shut down his investigation. Is this what the future has in store for Zelenskiy?

Between a Rock and a Hard Place

One key difference between US and Ukrainian “deep states” is that the Ukrainian one does not lead an independent existence. Rather, it is a creature of the US and Western European political establishments who provide it with direction and guidance. While US and EU political and economic objectives concerning Ukraine may differ on a few points (the EU is mainly interested in exploiting Ukraine’s agricultural and natural resources, whereas the US sees it as a military battering ram against Russia), for all intents and purposes they are united enough to treat them as a single entity.

If the Ukrainian “deep state” is the rock,  the Ukrainian people who are plainly tired of the war, desire better relations with Russia, and a return to something resembling the normalcy of the late Yanukovych era when Ukraine was considerably more free and prosperous than it is after 5 years of post-Maidan reforms, are surely a hard place to be reckoned with. The stunning rejection of Poroshenko in the polls indicates the moral bankruptcy of the entire Maidan revolution camp, including the aforementioned Ukrainian “deep state”.

At the same time, the removal of Poroshenko will weaken the positions of the “deep state” and enhance those of the Ukrainian oligarchs who, while not exactly friends of the Ukrainian people, are nevertheless interested for their own reasons in less confrontational relations with Russia. Poroshenko, being a political veteran with a respectable power base of his own, was able to curb their ambitions and impose his will on them. Under Zelensky, the oligarchs will almost inevitably become considerably more assertive in defending their economic interests, which is liable to lead to political pressure on Zelensky to moderate Ukraine’s policies toward Russia. The early sign of this was the decision by a court in Kiev that the nationalization of Igor Kolomoysky’s Privat-Bank was unlawful, though so far the Ukraine Central Bank shows no signs of abiding by that decision.

Will Zelensky be able to deliver policies that are genuinely different from Poroshenko’s? It remains to be seen whether he feels himself powerful enough politically to replace the entire national security team, including the likes of Avakov, Turchinov, Poltorak, Klimkin, and other national security and foreign policy players who are utterly compromised by their anti-Russian policies and the crimes committed by Ukrainian military and security services in the Donbass. If they remain in office, there is little reason to believe Zelensky is anything other than a figurehead.

Further complicating matters is the fact that Ukraine today is far weaker and more dependent on the West than it was 5 years ago. Successive IMF loan tranches and the vastly higher indebtedness of the Ukrainian state mean that Western powers have many levers of influence on Zelensky. The United States is showing no sign of losing interest in Ukraine, likewise the EU’s policies have shown no sign of moderation. Ukraine’s continued need of loans and loan restructuring alone give Western powers a de-facto veto on Ukraine’s foreign policies. While not wholly pleased with Poroshenko’s tenure in office, where he proved to be more interested in promoting his own interests rather than the interests of his Western sponsors (a key reason why the West now appears ready to sacrifice Poroshenko), he did deliver a confrontation with Russia which validated his support by the West. Should Zelensky attempt to pick up where Yanukovych left off, there is little reason to doubt that he would be quickly faced with yet another Maidan, which would once again receive both vocal and tacit support from Western powers. Also for that reason, we should not expect any progress on the question of the recognition of Crimea. This and many other issues are no longer Ukraine’s to decide. They are part and parcel of the West-Russia political and military stand-off, and can be only resolved as part of a general “peace treaty” between the two areas. In other words, Ukraine’s future is no longer in its own hands.

Given all of the above, while there are a few reason for optimism, one should also curb one’s expectations. Granted, the very fact of Zelensky embarrassing Poroshenko and the rest of the Ukrainian establishment is a cause for celebration. Ukrainian politicians have been shown to be out of touch with the Ukrainian people who do not share their political priorities and do not approve of their ineptitude and corruption. But since when does the will of the people affect Kiev’s policies, given the very direct influence Western governments have on shaping Ukrainian policies, both in the domestic and international realms? Moscow’s rather belated decision to impose a ban on petroleum exports to Ukraine, which is to enter force on June 1, 2019, suggests it is not expecting anything but a tough transition period to the new regime in Ukraine.